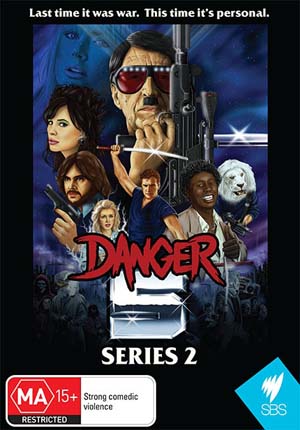 It’s been over two years since the first season of the bizarre Aussie comedy/adventure series Danger 5 (see review). But now it’s back! Bigger, bolder and way more over-the-top, the seven eps of Series 2 need to be seen to be believed.

Elite espionage team Danger 5 disbanded after defeating Adolf Hitler in a 60s inspired WW2 timeline. But it seems that the Führer isn’t dead after all — and he’s out to take over the world all over again. In an 80s inspired setting, Danger 5 reform to avenge the murder of their leader and foil Hitler’s plans. The Führer is attempting to achieve invincibility and world domination by taking over the body of an immortal American high-school girl. But there’s also a break-away group of Nazi dinosaurs intent on infiltrating the Vatican. The mind boggles!

As with season one, the taste is questionable, the effects are deliberately shoddy (which means they’re actually rather effective) and the humour is crass. The acting is all about chewing the scenery and the direction is intent on sending up every 80s cliché there is. Oh yeah… and the whole thing really doesn’t make an awful lot of sense. But it is bloody good fun — and I do mean bloody. Lots of OTT violence with gushing blood, exploding heads and severed body parts.

The highschool ep is definitely a highlight, particularly with the casting of Shaun Micallef as the school’s principal.

I don’t imagine Danger 5 would be everyone’s cup of tea. But if you want something weird, give it a go.

As for extras… there is a great commentary on the entire series from creators Dario Russo and David Asby. It gives you a bit of insight into the deranged minds that put this whole thing together.

Danger 5: Series 2 is released on DVD in Australia by Madman.