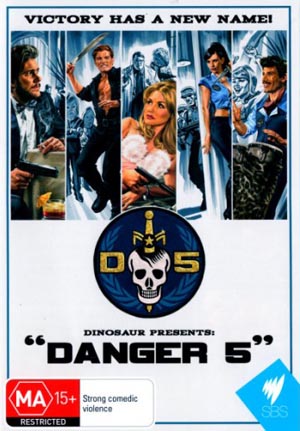 Danger 5 is a six-part Australian comedy series that originally screened on SBS. It is without a doubt one of the weirdest things I have ever viewed. It literally has to be seen to be believed. And I loved it!

Danger 5 follows the adventures of an elite international team of espionage agents during WWII — Jackson from the USA, Tucker from Australia, Ilsa from Russia, Claire from the UK and Pierre from France. As well as taking on special assignments such as stopping Nazi dinosaurs and preventing the Nazis from stealing the world’s greatest national monuments, their ongoing mission is to kill Hitler. What’s really interesting about the setup is that it’s not the WWII we are familiar with. This is a bizarre, 1960s inspired alternative timeline.

The look and feel of the production is also very 60s, complete with cheesy special effects straight out of Thunderbirds (you can even see the strings). The humour is also rather corny with many running jokes and much slapstick. The acting is deliberately OTT and the writing far from subtle. And then there are the many bizarre aspects that are never explained — like why the director of special ops has the head of an eagle; or why all the German Sheppard dogs (amusingly realised with puppets) can talk.

I’m afraid that I am at a complete loss as to what else to say about this show. It’s weird! It’s funny! But it won’t be everyone’s cup of tea.

The DVD release also contains the webisodes that form a prequel story. Unfortunately there is nothing in the way of behind the scene stuff — pity, as I would have liked to know a little more about the deranged minds that came up with this programme.

If you want to find out more about the series, check out the official website.

Danger 5 is released in Australia by Madman Entertainment.