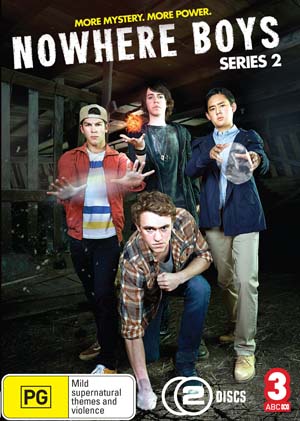 Nowhere Boys is a Melbourne-made teen fantasy/adventure series from ABC3. The first season was exceptionally good television viewing, and this second season is even better. Building on what was established in the first, the 13 eps of Series 2 take things to another level.

“Order must be restored.”

The four nowhere boys make it back to their own reality at the end of Series 1 (see review), discovering that they now have elemental powers — Felix can control fire; Andy can control water; Sam has the wind at his command; and Jake can cause the earth to shake. But they have been followed by Phoebe’s long-missing sister Alice. In Series 2, things quickly go wrong, with Andy whisked away to an alternative universe and the other boys needing to find out what Alice is up to in order to get him back. Andy’s disappearance is being investigated by Detective Sergeant Roland Murphy, the homeless wild man from the other reality, who is convinced the remaining three boys are responsible for Andy’s disappearance. Meanwhile, in the alternative universe, Andy has troubles of his own. They’ve packed so much into this season.

Nowhere Boys is so well written. The characters feel real and the relationships are believable, despite the fact that so many unreal things are happening. The tension is built steadily across the episodes, but each individual episode is great viewing in its own right. There is humour, adventure, excitement and drama, all wrapped up in a magical fantasy. And the story goes in unexpected directions. It’s the kind of quality series that makes me yearn to write for television.

The cast is as strong as ever. Each of the four leads (Dougie Baldwin as Felix, Joel Lok as Andy, Rahart Adams as Sam and Matt Testro as Jake) are excellent — engaging and likeable and believable. With this season the girls get larger roles, as they get suspicious of the boys and start to conduct their own investigations. Tamala Shelton as Sam’s girlfriend Mia, Michelle Gerster as Andy’s sister Viv and Darci McDonald as goth-girl Ellen, all do well at extending their characters. And then there’s Phoebe Roberts as Saskia, the new girl with a secret. But the standout performance this season is from Jim Russell, who not only plays the Detective in one reality and the homeless man in the other, but also Sam in the Detective’s body during a body-swapping incident. He does a remarkable job of making each one a distinct person.

Series 2 of Nowhere Boys is a stunningly good-looking show. Top-notch production values, clever direction and great music. I particularly love the way the possessions are handled. The speeded up head-turns are simple but wonderfully creepy.

The two-disc DVD release includes an excellent making-of doco and a mini-episode. The doco is one of the best I’ve ever seen… even better than the Series 1 doco. Much of it is ‘hosted’ by the boys. It’s fun, fresh and spontaneous, while still managing to be informative. The personalities of the boys really shine through and you can’t help but like them. The mini episode is interesting. Made to screen online on New Year’s Eve, it’s an extra little chase scene through alternative realities that doesn’t really have any bearing on the series. But it’s cute.

As with Series 1, I watched it with the whole family. And we all loved it — particularly my 12-year-old daughter. There are so few shows that have the universal appeal beyond their target market. Yet another thing that makes this series special.

Note: What’s next for Nowhere Boys? A telemovie. It’s been announced for 2016. Can’t wait!

Nowhere Boys: Series 2 is released on DVD in Australia by Roadshow Entertainment.