Blu-ray Review — Doctor Who: The Doctor, the Widow and the Wardrobe 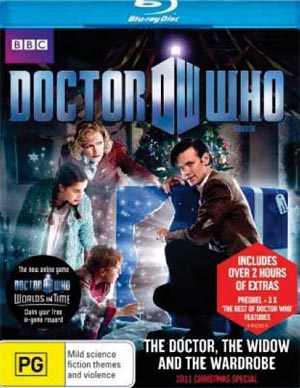 The companionless Doctor #11 (Matt Smith) has his second Christmas adventure with “The Doctor, The Widow and the Wardrobe”, a fun tale vaguely reminiscent of The Lion, the Witch and the Wardrobe. Watching this special episode at Christmas on the telly, I was rather disappointed with it. Watching it for a second time, now on crisp and clear and amazing hi-def Blu-ray, I’m pleased to say that I found myself enjoying it a lot more.

Firstly, let me rabbit on about the wonders of Blu-ray. I’ve not had my Blu-ray player for all that long, so I am still enamoured by the huge jump in picture quality from a DVD. And this Christmas Special looks GLORIOUS in hi-def — particularly one moment when a snowflake blows towards the camera. It flitters across the screen in less than a second, and yet for that brief time, you can see it in all its intricacy. Amazing! If you’ve got the choice, spend the extra cash and get the Blu-ray — it’s worth it.

Doctor Who is not always known for its scientific accuracy, but I can usually suspend disbelief for the sake of a good story. The beginning of this ep, however, is a tad hard to swallow and rivals some of the sillier James Bond opening sequences. We then settle into a story of the Doctor trying to give the newly widowed Madge Arwell and her two kids, Cyril and Lily, a very special Christmas present. Madge and the kids go to spend Christmas in a deserted old house and the Doctor poses as the caretaker. He uses a dimensional portal wrapped up like a giant Christmas present to prepare a trip to a snow covered forest on Androzani Major (Classic Who fans will smile at this reference), where pine-like trees grow naturally-forming Christmas baubles. But things go wrong when Cyril opens the present early and enters the forest on his own. The Doctor and Lily go after him. And then Madge also follows.

Unfortunately for all of them, the forest is about to be bombarded with acid rain, as the Androzani inhabitants prepare to harvest it. But the forest has plans of it own — plans to escape — but first it needs to trap a human host.

There are numerous little lapses in logic, and I found the Doctor’s ‘improvements’ to the house at the beginning of the episode a bit overdone — but the reason I was initially disappointed with this episode is because it’s no where near as good as the previous Christmas Special, “A Christmas Carol” (see my review). “A Christmas Carol” was so Christmassy, so whimsical, so perfect; while “The Doctor, the Widow and the Wardrobe” seemed like it was trying too hard to live up to the memory.

But watching it a second time, and expecting to be disappointed again, I found myself really enjoying it… Maybe because I wasn’t spending all my time comparing it to its immediate predecessor. And without that comparison blocking my vision, I was able to see all the good bits.

The guest cast is brilliant. Claire Skinner is believable and sympathetic and gives a really heartfelt performance as Madge. Maurice Cole and Holly Earl are lively and engaging as Cyril and Lily. Alexander Armstrong (who fans will know as the voice of Mr Smith in The Sarah Jane Adventures) makes the most of his small role as the ill-fated fighter pilot, Reg Arwell. And in a piece of brilliant comic casting, Bill Bailey, Paul Bazely and Arabella Weir steal the show as the three military grunts making sure the forest is clear prior to the acid rain. Their confusion over a scanner that is unable to tell the difference between weaponry and wool is priceless.

The story is interesting for the fact that it doesn’t really have a villain. The forest is merely trying to save itself, while the Androzanis are using the acid rain to harvest the forest, not knowing that the trees have ‘souls’.

When Lily asks the Doctor what’s happening, he replies:

“No idea. Do what I do. Hold tight and pretend it’s a plan.”

But my absolute favourite bit of dialogue, the bit that made me choke up, is this exchange between Madge and the Doctor…

MADGE: Lily and Cyril’s father — my husband — is dead and they don’t know yet because, if I tell them now, then Christmas will always be what took their father away from them and no one should have to live like that. Of course, when the Christmas period is over, I shall… I don’t know why I keep shouting at them.

The episode finishes up with a little epilogue, as the Doctor goes to visit Amy and Rory. Whereas the rest of the story is self-contained and can be watched without an in-depth knowledge of the series, the epilogue is for the fans and will mean very little to the casual viewer.

So, I’m glad I watched it a second time. It’s interesting how watching something with a different perspective can make you appreciate it more. Having said that… I still think that “A Christmas Carol” is the superior Christmas Special.

The disc comes in a standard Blu-ray case, and includes the one and a half minute web-prequel, which is a rather poignant lead-in to the story. Also included are three US featurettes, meant to screen during the mid-season hiatus of Series 6. They are nicely produced but little more than catch-up specials for people not too familiar with the program. They focus entirely on Series 5 and the first half of Series 6, and feature a bunch of mostly irrelevant C-grade American celebs talking about “The Doctor”, “The Companions” and “The Monsters” of the series. At least they have included Mark Sheppard, who played Canton Delaware in Series 6.

“The Doctor, The Widow and the Wardrobe” was released on Blu-ray and DVD in Australia by Roadshow Entertainment in March 2012.