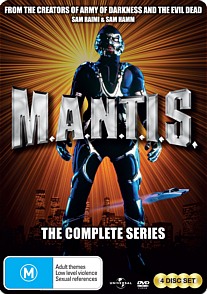 One of the things that I love about the DVD revolution is the fact that all sorts of weird, wonderful and obscure television shows are getting a new lease on life. I’m a fan of crappy old sci-fi shows… so I was pleased to find out that M.A.N.T.I.S., a series I missed during its initial run in the 1990s, was being released on DVD. I’ll be perfectly honest — it’s not brilliant television by any stretch of the imagination… but it is interesting, it tries really hard and it’s kinda fun.

Created by Sam Raimi (the man behind such films as The Evil Dead and 2002’s Spider-man) and Sam Hamm, M.A.N.T.I.S. is a sci-fi, superhero series most notable for featuring television’s first African-American superhero. Scientist and entrepreneur Miles Hawkins (Carl Lumbly) is shot during a riot while helping a child, and ends up in a wheelchair. Using the resources of his company, he creates a powered exoskeleton. Not only does it allow him to walk, but it empowers him with superhuman strength. Of course, he ends up using the exoskeleton to fight crime, becoming a vigilante known as the Mantis.

Hawkins teams up with his best friend and fellow scientist, John Stonebrake (Roger Rees), a young courier named Taylor Savage (Christopher Gartin) and the beautiful police detective, Lt. Leora Maxwell (Galyn Görg). Oh yeah, and he has a secret underwater base, a flying car and immobilising darts (so he doesn’t have to actually kill the bad-guys).

Although the show has some silly aspects and is primarily action/adventure driven, it tries hard for human drama as well. Particularly well handled is how Miles Hawkins comes to terms with his disability and how he struggles with the concept of being a vigilante. It’s also nice to see that he and Stonebrake don’t always see eye-to-eye on how the exoskeleton should be used.

It’s interesting to see how the show develops. As well as the 22 episodes of the series, the DVD set also includes the original pilot, which is quite different — the exoskeleton looks different, the support characters are different, and the whole thing is very heavy-handed and full of commentary about the oppression of African-Americans. The series itself concentrates more on personal drama. Despite the fantastical nature of the concept, the series starts out by trying to ground itself in some semblance of reality. So the Mantis fights ordinary crime — robbers, corporate crims and the like. But about half-way through, the series suddenly changes and goes for full-on, over-the-top sci-fi. We get everything from supervillains to time travel and alternative dimensions, from mind control to ancient druids… hell, we even get to see (or not see) an invisible dinosaur.

The second half of the series is certainly the weaker, pushing aside reality and human drama in favour of cheesy sci-fi. But it’s still fun.

There are a couple of other interesting points worth mentioning. The series has a definite ending. SPOILER ALERT! SPOILER ALERT! SPOILER ALERT! Miles Hawkins, a.k.a. the Mantis, dies at the end! You would think this would be dramatic and sad and a great way to end the show. Unfortunately, the final ep is the one with the invisible dinosaur, and the whole thing is rather dumb and anti-climactic. A pity!

The first half of the series is scored by Christopher Franke, who would go on to write the much-talked about music for Babylon 5. His music includes quite a catchy theme. But the second half changes composers to Randy Miller.

All up, this is an interesting show. Like seaQuest DSV (read my review of the third season), it straddles the eras of American-made genre television, sitting a little uncomfortably between the silly, gimmicky, episodic sci-fi and the thoughtful, more arc-driven science fiction that was to come. M.A.N.T.I.S. is not something I’d recommend for people who are after high-quality television of the sort we often get these days. But if you’re interested in the development of television sci-fi and superhero drama, then you could certainly do a lot worse. And if, like me, you simply enjoy a bit of old, crappy, sci-fi fun… then M.A.N.T.I.S. is one of the better ones.

The DVD set has no extra features, but is presented in a rather flashy metal case. The case looks terrific, but is lacking in info. A list of episode titles would have been nice. Why oh why do designers think it’s a good idea to leave off such pertinent info?

Gamers News Blu-ray Review — Doctor Who: The Doctor, the Widow and the Wardrobe