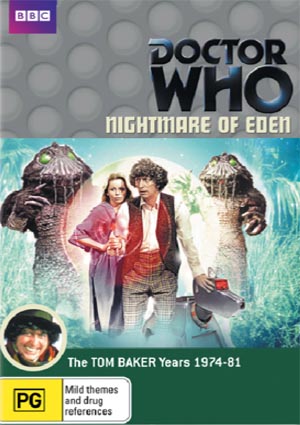 A serious storyline about drug trafficking, some wry humour and some OTT slapstick are mixed together in “Nightmare of Eden”, the fourth story from the 17th season of Doctor Who in 1979. Perhaps not the best example of Doctor Who from the Tom Baker era, it is nevertheless an interesting watch.

The Doctor and Romana arrive aboard a passenger spaceship that has collided with a private ship during rematerialisation from hyperspace. The ships have fused together, causing unstable areas and interfering with the Continuous Event Transmuter (CET) — a machine containing crystals on which are stored flora and fauna from various planets. The CET is the property of a scientist named Tryst, who has been collecting and cataloguing life forms from various planets. But now some of these life forms, dangerous creatures called Mandrels, have escaped. All this, however, is background for the primary story about drug smuggling. So the Doctor and Romana have to get the ships separated, stop the Mandrels from killing the passengers, find out who is smuggling the deadly vraxoin drug, and try to discover the source of the drug.

The drug trafficking storyline is quite serious and very well handled. It is lightened up a little by the presence of two bureaucratic and narrow-minded excise officers, who provide a nice touch of humour. There is also a lovely moment of humour with the two captains arguing over liability and insurance. Unfortunately the story is let down by some rather ridiculous slapstick comedy towards the end of the story. It is utterly ridiculous and brings down the tone of the whole thing. The commentary track seems to imply that the slapstick was more the influence of Tom Baker rather than the writer. Baker’s performance of the Doctor did degenerate over the years, becoming more jokey, and we certainly see evidence of this in “Nightmare of Eden”.

The production values of this story are variable. The model work is passable while the CET machine interaction is excellent. But the Mandrels are far from threatening, with their funky flared trousers and often-visible zippers. The action scenes are clunky and the scene where the Doctor bites the carnivorous plant that is trying to eat him, is pure pantomime.

The cast do a reasonable job, although at times it’s obviously hard to react to the Mandrels with any real fear. Tom Baker’s performance as the Doctor is inconsistent, with touches of absolute brilliance interspersed with moments of caricature. Lalla Ward, who I’ve always regarded as a rather weak actress prone to dreadful bouts of over-acting, does quite well in this story as Romana. The guest cast do well, although Lewis Fiander’s ridiculous accent as Tryst is somewhat distracting.

Despite its problems, “Nightmare of Eden” is still quite a watchable and entertaining story.

As is usual with the classic Doctor Who DVDs, this is a good release. Even though it is a one-disc edition, there are some great extra features. The commentary is particularly good, with highlights including writer Bob Baker reminiscing about drinking beer with Douglas Adams, and Lalla Ward providing some personal insight about her ex-husband, Tom Baker.

I wouldn’t necessarily recommend this DVD to the casual viewer, but for fans it is a definite must have.

Doctor Who: Nightmare of Eden is released on DVD in Australia by Roadshow Entertainment.