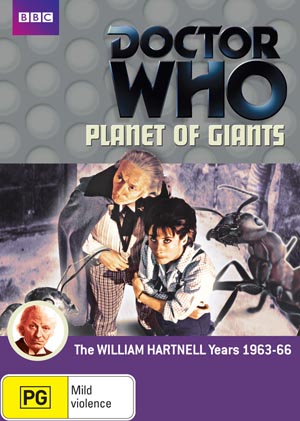 “Planet of Giants” is quite a unique three-part story from the early days of Doctor Who. It was the season opener for the show’s second year, with the original Doctor, William Hartnell. Often criticised as being a weak story, “Planet of Giants” makes for interesting viewing because it is so different from other stories.

Due to a mysterious fault, which is never adequately explained, the TARDIS and its occupants are all shrunk down in size. The Doctor and his companions, granddaughter Susan and schoolteachers Ian and Barbara, arrive in a garden, which to them is gigantic. Mysteriously, all the insects are dead. Hearing a gunshot, they go to investigate. What ensues is a story about a new insecticide that is a little too powerful — killing everything it comes into contact with, rather than just pests. The guy who owns the company that is producing it, murders the civil servant who threatens to withhold approval for its production. The Doctor decides they need to stop the use of this insecticide, but Barbara is accidentally infected.

It’s a very interesting story. It is the only story of the series in which the TARDIS and it crew change size. Because of this size change, the TARDIS crew don’t actually interact with any other characters in the story, who are all normal sized. So, for most of the time, the two storylines run parallel, converging only at the end when the actions of the miniaturised heroes have consequences in the larger world.

The script is at times a little heavy-handed and is also very dialogue driven, but for the most part it is also entertaining. It examines the notion of science requiring morality and the concept of the ends justifying the means.

The sets and the giant props are a highlight and hold up pretty well by today’s standards. The painted backdrops and photographic back projection, on the other hand, are not so good.

The guest cast are excellent, but it is the regulars who really get to shine. Watch William Hartnell carefully — even when he’s not actively involved in the dialogue, you can see the thoughts going through the Doctor’s mind. Such a good performance.

The first two episodes are a little slow, but things really speed up for the third and final ep. This is because the third episode is actually an edited version of two episodes. As you will discover in the extras, “Planet of Giants” was actually shot as a four-parter, but the last two parts were edited down to one because they were too slow.

The commentary is really interesting. No actors, just a few of the crew. Although they sometimes have trouble recalling details, they provide a wealth of information about shooting styles and how television was made in Britain back in the 1960s. There is no ‘making-of’ doco, but we do get a reconstruction of episodes three and four as they were originally intended. Since the originally excised footage was destroyed, the reconstruction was created using voice actors, re-edited footage and a few bits of CGI. Mostly, this goes to show what a good decision it was to edit things down. Although there is a little more character development, it is mostly just padding. There are a few other extras on the disc, the best of which sees original producer Verity Lambert reminiscing about the first Doctor.

All up, this is a good release. “Planet of Giants” is an excellent example of innovative television from the 1960s.

Doctor Who: Planet of Giants is released on DVD in Australia by Roadshow Entertainment.

Outside In DVD Review — Doctor Who: Vengeance on Varos, Special Edition