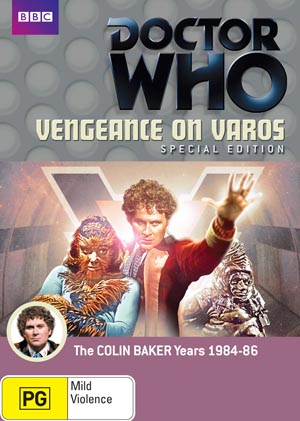 “Vengeance on Varos” is a rather grim but well-handled satire of television viewing, politics and big business. Featuring Colin Baker as the sixth Doctor, it is from the 22nd season in 1985. Although only two parts, it is from the era when episodes were 45 minutes instead of 25 — so is equivalent to a traditional four-parter.

The Doctor and his annoying assistant Peri (Nicola Bryant) arrive on the planet of Varos, just in time to stop an execution and go on the run from the authorities. On this planet, all sorts of violence is televised — from the torture and execution of rebels, to a unique form of political polling. Governors must periodically submit to popular votes, with the results hooked into a cell disintegrator. Too many losing votes and the Governor is killed on live television. Not surprisingly, Governors tend not to last very long on Varos.

Varos has only one export — zeiton 7 — a rare ore that the inhabitants do not know the true worth of. And so they are easily tricked into selling it for much below its market value to the Galatron Mining Corporation and its slimy, slug-like representative, Sil. Finding himself in the midst of all the violence, profiteering and corruption, the Doctor can’t help but get involved.

“Vengeance on Varos” is a grim and intriguing story. The script is intelligent and explores many interesting themes — from commercialism and the power of corporations to the popularity of televised violence. And it has an absolutely brilliant ending. There are shades of Orwell’s 1984 in this story and, rather ominously, it foreshadows the reality television phenomenon.

Despite its statement on violence, the story itself is rather violent… and it was greatly criticised at the time for this aspect. In fact, the Doctor’s violent and callous behaviour has often been criticised. I think these criticisms have been blown up out of proportion. The Doctor has had violent and callous moments throughout the show’s history — from the first Doctor’s almost attempted murder of a cave man in “The Unearthly Child”, to the third Doctor shooting an Ogron in “Day of the Daleks”.

For the most part, the production is rather good. Some great costumes and make-up, good sets and reasonable effects. But it does have some hiccups, mostly notably the golf buggies (which are hilariously slow as escape vehicles) and the infamous, elderly cannibals wearing nappies (more pathetic than threatening).

Colin Baker is at his acerbic and arrogant best as the Doctor, and Nicola Bryant is tolerable in this story as Peri. The guest cast are exceptional. Much is made of the shirtless Jason Connery, but for my money, it’s Nabil Shaban, Forbes Collins and Martin Jarvis who take out the acting honours. Shaban makes Sil so much more than a monster-of-the-week, giving him real personality and believability. Collins, is cool and calculating as the corrupt Chief Officer, and yet oddly, almost likeable. Jarvis, as the Governor, is utterly convincing and sympathetic as a man in an impossible situation, with no way out. His performance is quiet and subtle, and is a wonderful contrast to Shaban’s blustering vileness.

The DVD release is a two-disc special edition, and it’s brilliant! Lots and lots of extra features, including some fascinating deleted and extended scenes. There is a retrospective doco as well as contemporary material. The French and Saunders sketch is interesting for its extreme un-funniness — no wonder it has never been screened. Colin Baker, Nicola Bryant and Nabil Shaban provide an interesting commentary, although without a moderator they do lapse into long silences every now and then. The commentary is most interesting for Baker’s opinions on the alienness of the character he plays.

All up this is an awesome release — great for fans, but also a story with much to offer casual viewers.

Doctor Who: Vengeance on Varos, Special Edition is released in Australian on DVD by Roadshow Entertainment.