DVD Review — Doctor Who: The Reign of Terror 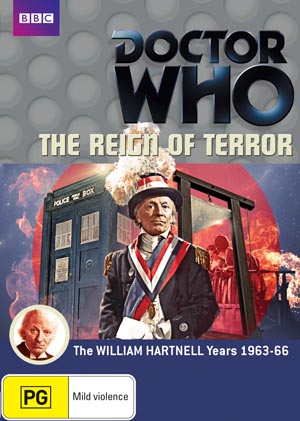 With animation being used to reconstruct the two missing episodes, we finally have Doctor Who’s first season finale on DVD. “The Reign of Terror” is a six-part historical adventure first broadcast in 1964 with William Hartnell in the role of the Doctor. Good production values, an interesting setting and great dialogue combine in a must-watch piece of Doctor Who history.

The Doctor, his granddaughter Susan and schoolteachers Ian and Barbara, arrive in France in 1794 during Robespierre’s post-revolutionary reign of terror. It’s a bloody period of history, with hundreds of people losing their heads to Madame Guillotine. The Doctor and his companions become involved with a group of people who rescue prisoners, helping them flee the country, and an English spy named Sterling. Our heroes are separated and the Doctor ends up impersonating a Regional Officer of the Provinces as he attempts to find his fellow time-travellers.

It’s an interesting story, full of wonderful historic atmosphere… even though the details are not always accurate. You really get a sense of the grim and difficult times, especially when our heroes get chucked into prison, and there is much violence, even if it is off-screen. And yet, the writer also manages to get some humour into the story as well, particularly with the jailer at the Conciergerie Prison. The Doctor actually gets to meet Robespierre and we get to witness his downfall. He has little to do with the plot, but he is presented in a very human way… as more than simply a tyrant.

“Death, always death! Do you think I want this carnage?”
Robespierre

And even Napoleon gets to make a brief appearance. Watching this story made me lament the fact that the revived series doesn’t delve into purely historical tales.

I love the way this story questions who is right and who is wrong. Are Robespierre’s supporters all evil? Can an otherwise good person do questionable things in the name of patriotism? Are those who save people from execution actually traitors? It’s all a matter of perspective. The Doctor and his companions also get to discuss the topic of altering history… or rather, their inability to make changes. And there is some terrific dialogue.

“The events will happen, just as they are written. I’m afraid so, and we can’t stem the tide. But at least we can stop being carried away with the flood!”
The Doctor

On the down side, the plot is rather slow moving and could easily have done with one less episode. The cliff-hangers are also dwelled upon rather too long. But these things, and a couple of continuity problems, are all minor quibbles in an otherwise excellent six-parter.

The production values are really quite good, with some great costumes and some particularly nice model work. Yes, there are painted backdrops, but in black and white they work rather well. This story also features the show’s first use of location filming, albeit in only a few shots.

Of course, as any die-hard Doctor Who fan will know, episodes 4 and 5 no longer exist, having been wiped from the BBC archives many years ago. Thankfully, the audio from the episodes does still exist, and it has been combined with animation to recreate those missing episodes. The animation, while limited, is quite nice, but the onslaught of quick shots is very different in style to the surviving episodes. Still, it is wonderful to finally be able to watch this story in its entirety.

The DVD release is a good one, with an excellent making-of doco that explores the directorial difficulties faced during the production of this story. Sadly, there are no extras about the animating of the missing episodes. The commentary is a particularly good one, with cast and crew coming and going for the various live-action episodes, moderated by Toby Hadoke. One of the animated eps features two archival experts and the other features a one-on-one interview with Ronald Pickup, who only had a brief role in the episode in question, but is now a rather well-respected actor of some note. Commentary highlights include Hadoke’s location-spotting story and actor Jeffry Wickham’s boozy corpse-shot story.

All up this is a great addition to any Doctor Who viewer’s collection, and an excellent example of early Doctor Who.

BTW, if you’d like a slightly more off-beat perspective on this story, try reading my essay “The Mysterious Case of the Missing Actors”, in Outside In: 160 new perspectives on 160 classic Doctor Who stories by 160 writers.

Doctor Who: The Reign of Terror is released in Australia on DVD by Roadshow Entertainment.

George Ivanoff Speaks about “What if?” DVD review — Doctor Who: The Legacy Collection