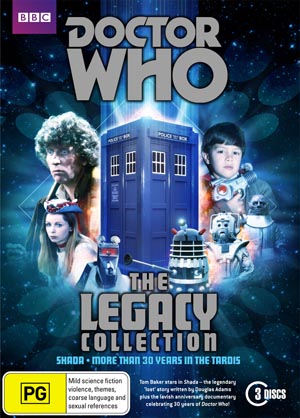 At long last, the legendary never-completed Tom Baker story, “Shada”, has been released on DVD. It’s been packaged together with the documentary, “More Than 30 Years in the TARDIS”, as well as a heap of extras, in a three-disc set called Doctor Who: The Legacy Collection. And a pretty awesome collection it is.

“Shada”, written by Douglas Adams, was intended to be the final story of the 17th season of Doctor Who in 1980. Due to industrial action, it was never completed and thus not aired as part of that season. In 1992 it was released on VHS with Tom Baker providing a slightly OTT linking narration to fill in the gaps left by the unshot scenes. This story has achieved legendary status simply because it remained unseen for such a long time. But does it actually hold up?

The Doctor (Tom Baker) and Romana (Lala Ward) go to visit a retired Time Lord named Professor Chronotis, who lives and teachers at Cambridge. Arriving at the same time, is the power-hungry Skagra and his mind-stealing sphere. Skagra is after a book that Chronotis brought with him from Gallifrey — The Worshipful and Ancient Law of Gallifrey. This book will allow Skagra to get to Shada, a prison set up by the Time Lords, where he intends to locate one of the inmates, a powerful Time Lord criminal named Salyavin. Skagra needs Salyavin’s mind in order to carry out an audacious plan. Can the Doctor stop him?

“Shada” is certainly not the best Baker-era story, but it is very watchable. At its heart is a really interesting concept that sometimes gets lost in the plotting and humour. The story has a fair bit of typical Adams humour (a la The Hitchers Guide to the Galaxy), which doesn’t always suit the story. But when it does hit the mark, it does so superbly — as with the confusion of tenses that Chronotis has when referring to himself, or when he says:

“Think of me as a paradox in an anomaly, and get on with your tea.”

It is rather good to see Tom Baker’s Doctor is top form. His interaction with Romana is particularly good. The guest cast are all great, particularly Denis Carey as Professor Chronotis. Production values on this story, however, are not so great, with a particularly dodgy costume for Skagra and a mind-sapping sphere that is wholly uninspiring.

The “Shada” discs also have many fine extras, although the lack of a commentary is disappointing. Extras include a making-of doco, a history of the impact of industrial action on Doctor Who, and “Being a Girl”, an examination of how women have been represented in the series. Also included is the animated webcast of the audio version of “Shada” produced by Big Finish Productions in 2003. The animation is very limited but quite watchable. It is a rather interesting production that replaced Tom Baker with Paul McGann’s eighth Doctor, and cleverly reunited him with Romana and K-9. It is accessed as Flash files via computer. I would have much preferred a conversion to DVD so I could watch it on a television screen.

“More Than 30 Years in the TARDIS” is an extended version of the 1993 Anniversary Documentary about Doctor Who. It is quite an excellent, comprehensive doco, that even includes the 1960s Dalek feature films. There are a lot of extras on this disc as well. My personal favourite is “Remembering Nicholas Courtney”, but there’s lots of great stuff here, including a superb little Easter Egg about Verity Lambert that is well worth searching for — go on, look for it… it’s not hard to find. 🙂

All up, this is another excellent Doctor Who release.

Doctor Who: The Legacy Collection is released on DVD in Australia by Roadshow Entertainment.

DVD Review — Doctor Who: The Reign of Terror New Readers