DVD Review — Doctor Who: The Mind of Evil 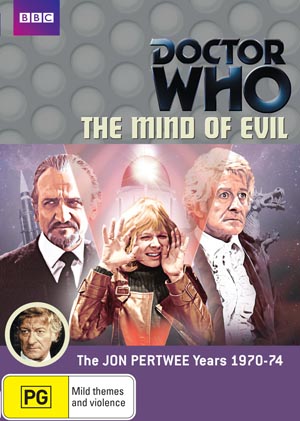 Prison drama meets mind-sucking sci-fi in this classic Doctor Who story. Originally broadcast in 1971, it’s the second story of Season 8. A great plot combined with strong performances and good production values results in an excellent example of Pertwee-era Who that is still just as entertaining in the 21st Century.

The Doctor and Jo head off to Stangmoor Prison for a demonstration of the Keller Machine — a device designed to extract evil from the human mind — that is set to replace capital punishment. Meanwhile the Brigadier has his hands full providing security for the World Peace Conference, and Captain Yates is providing escort for a Thunderbolt missile, set to be dumped in the ocean. Of course, the three separate threads of the story soon come together with the arrival of the Doctor’s nemesis, the Master. [Okay, the Master doesn’t show up until ep 2, but I defend my spoilery review with the fact that he appears on the DVD cover.] Soon, everything revolves around the alien ‘mind of evil’ contained within the Keller Machine.

It’s a tight script and an exciting story that is well sustained over the course of six episodes (despite some repetitious cliff-hangers). And there’s some great dialogue, particularly from the Doctor.

“People who talk about infallibility are usually on very shaky ground.”

The prison sequences are really quite dark and dramatic, assisted by some excellent casting. The plot is a tad contrived in places, but is carried off with such enthusiasm and style that it really doesn’t matter. The only bits that bothered me were the water in the lungs of one of the victims (his mind may have been convinced that he was drowning, but to physically have water there is stretching things a little), and the curious inaction of the titular ‘mind of evil’ during the climax, as it simply allows things to unfold. The production values are great, particularly the stunts and action sequences by Havoc. Much is made, in the DVD extras, of the unthreatening quality of the briefly appearing dragon, but I don’t think it’s at all bad.

There is quite a big guest cast in this story, with Doctor Who stalwarts as well as new comers, and all are excellent in their roles. But I think it particularly worth mentioning Pik-Sen Lim as Captain Chin Lee and Kristopher Kum as Fu Peng. During an era of television that often saw Caucasian actors playing Asian characters (“The Talons of Weng-Chiang”, anyone?), the presence of these strong Asian actors lends a high degree of credibility to the story.

One can’t review a Pertwee story that includes the Master without mentioning Roger Delgado. He is the original and most definitely the definitive Master. Urbane and cultured, yet evil and power hungry — Delgado gets it all across without ever resorting to OTT acting. And the onscreen chemistry between him and Pertwee is electric. Which brings me to the regular cast. They are all in top form. Pertwee is my favourite Doctor, and his is my favourite era of Doctor Who — mostly because of the terrific rapport amongst the regular cast combo of Doctor, assistant and U.N.I.T. personnel.

The two-disc DVD release is excellent, with lots of extras. The moderated, rotating commentary with numerous cast and production people is great — lots of interesting titbits, memories and fun. Extras highlights include a good retrospective making-of doco about the story and an interesting contemporary doco about the Television Centre where much of Doctor Who was shot (even thought Doctor Who only features briefly in the doco).

Doctor Who: The Mind of Evil is definitely a must-own release for Classic Who fans and potentially a great intro to the Pertwee era for NuWho fans. Buy it!

Doctor Who: The Mind of Evil is released on DVD in Australia by Roadshow Entertainment.

The reviews are in DVD Review — The Invisible Man: The Complete Series