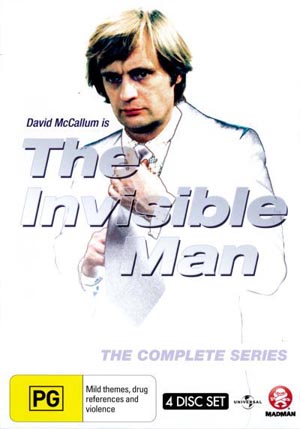 The Invisible Man is a US television series made in 1975. Although the series claims to be based on the HG Wells novel, there really is no connection beyond the premise of a man turning invisible. It only lasted for twelve episodes (plus pilot), and is rather dated, but still manages to be an interesting and enjoyable watch.

David McCallum and Melinda O Fee play husband and wife scientists Daniel and Kate Westin. Daniel  accidentally turns himself invisible, but is unable to reverse the process. Initially using make-up, and then special gloves and masks for his hands and face, he is able to live and work in everyday society. In exchange for the resources of the KLAE Corporation, which he and Kate use to try and make him visible again, the two of them take on various secret missions under the codename “The KLAE Resource”. Basically, the KLAE Corporation rents out their services to the government and other organisations, for large sums of money.

There are a number of differences between the pilot and the series proper, as the producers tweaked things to make the concept more workable on a weekly basis. This includes the switch from make-up to masks to conceal the invisibility, and the setting up of “The KLAE Resource”.

The series works quite well within its limited framework. The writers manage to vary the plot lines so the series doesn’t get too formulaic, as it very easily could have. So we have everything from corporate espionage to international intrigue, and even some more personal cases that include corruption in small-town judiciary and a humorous (and rather silly) Las Vegas gambling ep. McCallum and Fee have a great onscreen chemistry and their scenes together have a ring of truth about them… even if the circumstances are often rather fantastical (and sometimes even a bit daft). It is their relationship that makes this such a watchable series. Craig Stevens as Walter Carlson, the man behind “The KLAE Resource” is well cast and is a welcome addition to the team.

The special effects are interesting, even if they’re not all that special by today’s standards. The blue-screen unmaskings are obvious but good for their day. Unfortunately, the strings are often visible when the invisible man is moving things around. And this seems to get worse as the series progresses — perhaps an indication of mounting time constraints. But, to a certain extent, it is also part of the show’s charm. The real flaw of the series is the concept of the facemask, which magically gives Daniel realistic eyes, teeth, tongue and inside of mouth.

The theme is by Henry Mancini, as is the score for the first few episodes. Perhaps not one of his more memorable scores, but still rather nice.

It’s interesting to note some of the names involved on the production side of things — people who would go on to make other more high profile shows, such as Steven Bochco (Hill Street Blues, NYPD Blue and Doogie Howser, MD), Harve Bennett (the Star Trek feature films) and Leslie Stevens (Battlestar Galactica and Buck Rogers in the 25th Century).

Unfortunately there is little in the way of extras on this release — an image gallery and some production paperwork… and that’s it.

All up, The Invisible Man is an enjoyable watch. And a good example of one of the better genre shows of the 1970s.

The Invisible Man is released on DVD in Australia by Madman.

DVD Review — Doctor Who: The Mind of Evil A trilogy of trailers