DVD Review — Doctor Who: Terror of the Zygons 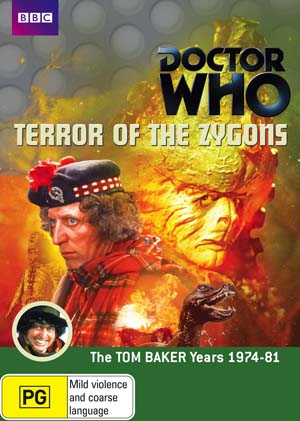 “Terror of the Zygons” is a very memorable four-part story from the Tom Baker years of classic Doctor Who (the first story of Season 13 in 1975). It features the Loch Ness Monster, the aliens who are about to make a comeback in the 50th anniversary special and the demise of U.N.I.T.

The Doctor, along with Sarah Jane Smith and Harry Sullivan, is summoned back to Earth by the Brigadier, who’s having a little trouble in Scotland. Oil rigs are being mysteriously destroyed, perhaps by a sea monster. The Doctor soon discovers aliens, controlling a cyborg Loch Ness Monster, bent on taking over the world.

It’s an interesting plot with lots of great dialogue… there’s some particularly nice commentary on humanity’s dependence on fossil fuels. The strength of this story is in the characters and their interplay; the use of a Scottish setting and the myth of the Loch Ness Monster; and the excellent build up of suspense culminating in a brilliant reveal of the threat. I’m not sure the aliens’ plan of world domination quite make sense, but let’s not quibble. And I do love the fact that the Doctor sets off the fire alarm on the alien spaceship. 🙂

“Oil? An emergency? Ha! It’s about time the people who run this planet of yours realised that to be dependent on a mineral slime just doesn’t make sense.”

What makes the story so memorable are the Zygons themselves. They are a brilliantly conceived and designed alien race, and are one of the most convincingly portrayed species the series has ever produced — the perfect blend of costume, make-up, performance and set design. The look of their technology is very organic and mirrors the design of the Zygons themselves. This is their one and only appearance in the classic series, but they are scheduled to make a comeback later this month in the 50th anniversary special, “The Day of the Doctor”. I am rather looking forward to it!

This story features one of the all-time greatest cliff-hangers in Doctor Who history. For the majority of episode one, we only get glimpses of the Zygons, never seeing one in its entirety until the final reveal at the end of the ep. Very cool!

Unfortunately, not every aspect of this production is as good at the Zygons. The model work of the oil rigs and spaceship is reasonably good for its day, but old Nessy herself is not all that great. The creature is far from convincing, and the CSO composition at the climax in the Themes is particularly groan-worthy.

The guest cast is excellent. John Woodnutt does a particularly marvellous job in what is essentially a triple role, playing Zygon leader Broton, the Duke of Forgill and Broton disguised as the Duke of Forgill. He manages to quite skilfully differentiate the three. Lillias Walker as Sister Lamont is also worth mentioning for her cold and sinister performance.

This story is notable as the final proper U.N.I.T. story, with the departure of Harry Sullivan as a companion. U.N.I.T. was already being phased out with the change from Pertwee to Baker onscreen, and the change of production team behind that. Some U.N.I.T. staff would return in “The Android Invasion”, but as android copies of the characters. And the Brigadier would not return until the Peter Davison era in “Mawdryn Undead”. “Terror of the Zygons” really was the closing chapter for an era.

This is an excellent two-disc release, packed full of wonderful extras. There is a director’s cut of the first episode with a reinserted, restored scene (you can also watch the additional scene, unrestored, in isolation as one of the Easter eggs). The commentary includes several of the crew on rotation with Mark Ayres as moderator (who is not quite as good in the role as Toby Hadoke on other releases). There is some terrific behind-the-scenes stuff, interviews with Tom Baker and Elisabeth Sladen, a doco about director Douglas Camfield, as well as the third in a series of docos about U.N.I.T…. plus other bits and bobs. I particularly love the inclusion of an episode of Merry-Go-Round, a kids’ doco series. Elisabeth Sladen is the host of this ep, which is about oil rigs… so it ties in nicely with the story. Being a Sarah Jane fan, it was really good to see Sladen in action as herself.

This is an all-up brilliant release — a must-have for fans, but also an excellent story for the casual viewer and a great intro to the Tom Baker era.

A thank you to my teachers Talking Who