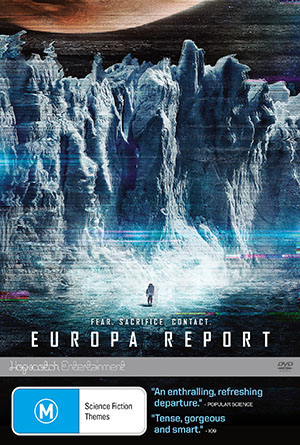 Presented as a documentary, Europa Report is a science fiction film about a troubled mission to one of Jupiter’s moons in search of extra-terrestrial life. The result is a convincing and compelling drama that really does look and feel like it could have happened.

Private corporation Europa Ventures launches a crewed mission to Europa. Based on recent discoveries, they believe that they may find evidence of single-celled, extra-terrestrial life beneath the moon’s frozen surface. But part way into the journey, communication with the ship is suddenly lost. Months later, mission control receives a final report.

These communications, featuring video footage from the ship’s many CCTV cameras, are presented along with ground crew interviews and news reports in the form of a documentary. This documentary puts together the chain of events aboard the ship and reveals the outcome of the mission.

The documentary style is convincing and makes for compelling viewing. I have not seen a faux-documentary approach used this well, albeit rather differently, since 2010’s Norwegian film Troll Hunter (see my review).

The cast are excellent… believably ‘real’. But it is the shooting style (static, pre-positioned cameras) and the flawless special effects that really sell the approach. So many of the scenes look like NASA footage. Brilliant stuff.

While the story is relatively simple, suspense is achieved by nonlinear presentation, revealing earlier events little by little. And the final mission outcome is hidden by the documentary style interview technique (I can’t really explain this any further without major spoilers… sorry!).

This is a superb film.

Unfortunately the DVD release is disappointing. No extras! None at all! This is particularly frustrating as the film’s doco style would have been interesting to explore in a behind-the-scenes featurette.

Europa Report is released on DVD in Australia by Entertainment One.