DVD Review — The Hound of the Baskervilles 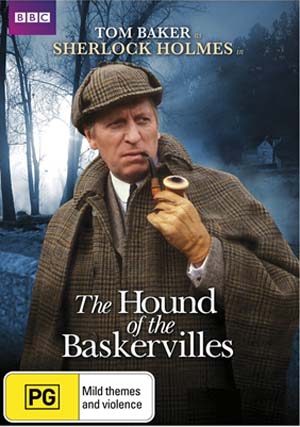 Made in 1982, The Hound of the Baskervilles is a four-part BBC serial, adapting the Sherlock Holmes novel by Sir Arthur Conan Doyle. A ghostly hound, an old family curse and cold-blooded murder form the basis of this mystery. It’s a well-known story and one that’s been adapted many times, before and since. So, what makes this one worth watching? Read on…

Producer Barry Letts (who had worked on Doctor Who and been involved in the casting of Tom Baker) heads a bit of a Who reunion on this production. Aside from Tom Baker as Sherlock Holmes, we’ve got Caroline John (Liz Shaw in Doctor Who) as Laura Lyons and former Who script editor Terrance Dicks.

The production has similar limitations to classic Doctor Who, with studio scenes shot on video and location work on film. It’s quite theatrical, with heavy reliance on static dialogue-driven scenes. And there are moments when the small budget is obvious. However…

The cast is excellent. The sets are intricate and beautiful. The costumes are great. Despite the many static scenes, the direction is good, often doing well to cover the lack of budget. In fact, it feels a bit like a Doctor Who production — especially given Baker’s rather Doctor-esque performance.

While not a brilliant Sherlock Holmes adaptation, it is a good one, with a great deal of charm and a style that seems very appropriate to the subject matter.

The only extra is a commentary with Tom Baker. It’s moderated and is often more of a general interview than a commentary on the specific production. But Baker is an amazing storyteller, and despite a few silent patches where he’s watching the drama unfold on screen, he is most entertaining — particularly when he’s wrong about something. There is an amusing moment where he mistakes actor Will Knightley for Peter Capaldi, insisting the credits must be wrong. And this becomes a bit of a running joke. Of course, with Baker, you’re never sure when he’s being serious. It’s a highly entertaining commentary, and the disc is worth it just for that.

All up, this is a wonderful bit of BBC production history, well worth a watch. I’m very pleased to see it released.

The Hound of the Baskervilles is released in Australian on DVD by Madman.

Weird Things and Cool Stuff Armageddon and the Doctor Who giveaway