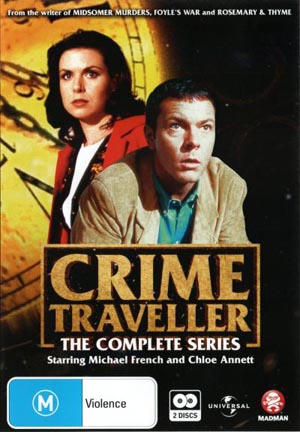 Originally screened in 1997, Crime Traveller is a police series with a sci-fi twist, where time travel plays an integral part in the solving of crimes. It is an interesting although rather flawed series — entertaining if you’re able to ignore the bits that don’t make sense.

Holly Turner is a police science officer who is secretly continuing her father’s time travel experiments. Her father built a time machine, but got trapped in a time loop, and she continues his work on the machine in the hope of eventually getting him back. She teams up with police detective Jeff Slade to reluctantly use the time machine in the solving of various crimes.

The most interesting aspect of this show is that Turner and Slade are unable to change the past. So they can’t go back in time to stop a crime. But they can go back to observe and gather evidence. Their actions in the past become part of already established history and it is fun to watch how this is all woven together. It really is quite clever at times.

Another interesting limitation of the time travel is that the machine is erratic and they never know how far back they will go — maybe a few minutes, maybe a few days. And they must return to the machine at the precise moment they left, or risk being trapped in a time loop, like Turner’s father.

As with most time travel stories, if you think about it too much, the problems begin to manifest themselves. The biggest issue with this show’s concept is that if Turner and Slade have to return to the machine at the precise moment they left… they would meet themselves. But they never do.

There are two other major problems with the series. Slade and the other police are really rather incompetent. Without the benefit of time travel, I don’t think they would ever manage to solve a crime. Unfortunately none of the cast are particularly convincing in their roles. I suspect it has a lot to do with the way the series is directed, but everyone seems to overplay things. Michael French as Detective Jeff Slade is the worst offender. I can’t help but feel the series would have been more watchable with a better cast.

The show’s biggest claim to fame is that it was created and written by Anthony Horowitz, who would go on to write the hugely successful Alex Rider teen spy novels. And Doctor Who fans will probably get a kick out of seeing Mary Tamm guest starring in one ep.

The two-disc set is a little disappointing due to lack of extra features. All we are given is a series trailer, some photos (although the cheesy publicity pics are worth a giggle) and PDF scripts. It’s better than nothing, but how about an interview with Horowitz? Or a commentary? It is especially irritating as the four-disc British release does include an interview with Horowitz.

Crime Traveller is released in Australia on DVD by Madman Entertainment.