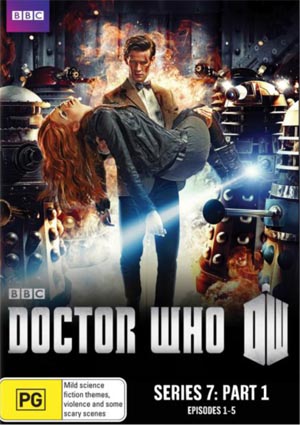 Doctor Who, under the reign of showrunner Steven Moffat, could easily be dubbed the Era of Really Cool Ideas. Unfortunately, these really cool ideas often come at the expense of other things — like plot, character development, continuity and consistency. The five episodes of Series 7, Part 1 demonstrate this rather well.

“Asylum of the Daleks” has an exceptionally cool and intriguing concept at its core, and is an example of the Moffat era approach working well. Yes, there are continuity issues and lapses in logic, but this episode is exciting and well-paced with an epic, cinematic feel and a mind-blowing reveal.

“Dinosaurs on a Spaceship” is a really cool idea in search of a coherent plot. It is over-written, under-explained, desperate and unstable in its ham-fisted attempts at humour and over populated with irrelevant characters. They have just tried to stuff too much cool stuff in here, resulting in a rather messy episode. On the plus side, this ep introduces Rory’s dad, one of the highlight new characters of the season so far — it’s worth watching just for him!

“A Town Called Mercy” is wild west story with an alien cyborg. Despite some uncharacteristic behaviour from the Doctor, the story works reasonably well right up until the silly conclusion and the clichéd epilogue.

“The Power of Three” is an intriguing story about the use of seemingly innocuous objects as weapons — mysterious boxes that appear all over the world without explanation. It’s well plotted, as the ‘boxes’ slowly become part of everyone’s lives, until their true purpose is finally revealed. And, sadly, it’s at the ending that things fall apart somewhat, with rushed explanations and an unconvincing climax. It’s good to see Rory’s Dad again. But the story’s greatest strength is the character of Kate Stewart, the daughter of the original show’s Brigadier Lethbridge-Stewart. Now in charge of U.N.I.T., she is very much her father’s daughter, but also a strong character in her own right. I certainly hope we get to see more of her in the future.

“The Angels Take Manhattan”, which sees the return of the Weeping Angels from “Blink”, is a bit of a mixed bag. The basic plot is really strong, with an excellent conclusion that wraps up the Ponds’ storyline. Their departure is both exactly what we have been lead to believe it might be… and not (can’t say any more about this… Spoilers, Sweetie). I’m not a fan of Amy Pond, but I think that Rory made an excellent companion, and Amy worked so much better when he was around. Their departure is exceptionally well handled — emotional, clever and absolutely perfect. Unfortunately this story also gets carried away with the cool stuff. Suddenly all sorts of statues are Weeping Angels, without adequate explanation as to why. And the whole Statue of Liberty thing is extraordinarily daft — a striking image, but one that make absolutely no sense.

There is not much in the way of extra features on this two-disc release (packaged in a standard DVD case within a nice cardboard slipcase). No commentaries. 🙁 It does have the mini web-series “Pond Life” (which is a 6 minute season prequel), the web 3 minute prequel for “Asylum of the Daleks”, a 2 minute short to accompany “A Town Called Mercy” and a US doco called The Science of Doctor Who. The doco is far from brilliant, with some rather tenuous links and grandiose statements about how most of what appears in Doctor Who will one day be science fact. Really? I am hoping that after the second part of the season has aired next year, a proper box set with commentaries and lots of extras will be released.

This half season is far from being the best batch of episodes from the revived Doctor Who series. But it is Doctor Who, and I’d still rather be watching this than most other things. 🙂

Doctor Who: Series 7, Part 1 is available on DVD and Blu-ray in Australia through Roadshow Entertainment.