DVD Review — Doctor Who: The Claws of Axos, Special Edition 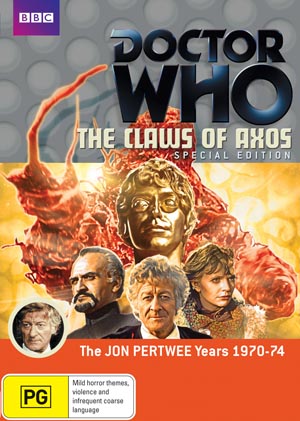 “The Claws of Axos” is a story of greed, political machinations and alien invasion. It is the middle story from 1971’s 8th Season of Doctor Who, with Jon Pertwee playing the third Doctor. It was Pertwee’s second season and the first for Katy Manning, playing the Doctor’s new assistant, Jo Grant.

A spaceship lands in England and the golden humanoid aliens offer to give Earth’s people a substance called Axonite — able to enlarge anything, it is the potential answer to Earth’s food shortages. Greedy government officials attempt to keep Axonite for Britain, while U.N.I.T. aims for a more global approach. But things are not what they seem — the Axons are actually hideous tentacled creatures; Axonite is a danger to Earth; and the Doctor’s old enemy, the Master, in involved. It’s up to the Doctor, Jo and U.N.I.T. to sort things out.

It’s a well-plotted, interesting story that suffers from variable production values. Some things work quite well (the tentacled creatures), some not so well (the clearly visible zippers on the backs of the golden humanoids). The rather psychedelic nature of the effects goes some way to disguising the inadequacies of budget.

Interestingly, there was a decision to show the Axons in their true form right at the beginning of the first episode. Although an effective opening, it robs the story of some dramatic tension.

The regulars are in great form and the guest cast is excellent. Peter Bathurst is particularly memorable as Chinn, the greedy government official, and Paul Grist is very likeable as the US agent, Bill Filer. Roger Delgado is, as always, brilliant as the Master, with a wonderfully understated performance. He has the uncanny ability to be both menacing and quite charming at the same time.

The script is tight, with lots of witty dialogue. One of my favourite pieces of dialogue occurs during a telephone conversation between Chinn and the Minister. Hinting that Chinn is a potential scapegoat, the Minister finishes up with…

“Do your best to keep me informed, old chap. After all, you are our man on the spot, Chinn — in more ways than one.”

And then there’s this little gem from the Master…

“I suppose you can take the normal precautions against nuclear blast… like, ah… sticky tape on the windows and that sort of thing.”

The two-disc Special Edition release is excellent, with lots of great extra features. “Living With Levene”, in which presenter Toby Hadoke spends some time getting to know John Levene (who played Sargeant Benton), is the undisputed highlight — a wonderfully candid insight. But the commentary, with Katy Manning, Richard Franklin and Barry Letts, is a little slow-moving and lacklustre in places. It would have benefited from having a moderator, as on other commentaries.

Final assessment: Not the best the Pertwee era has to offer — but a good, solid, entertaining story.

Doctor Who: The Claws of Axos, Special Edition is available on DVD in Australia from Roadshow Entertainment.