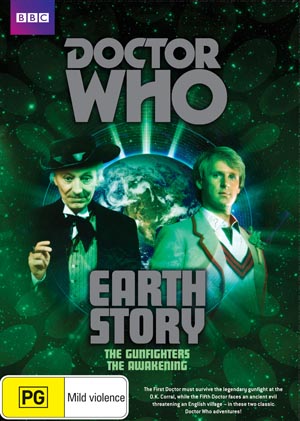 The BBC have, for a while now, been releasing Doctor Who box sets with stories from disparate eras grouped together because of a common element. Thus the two stories featuring the Mara were released as the Mara Tales box set (see review), and a couple of the Cybermen stories were released as the Cybermen box set… on so on. Now we are presented with the Earth Story box set, featuring two stories with absolutely nothing connecting them other than the fact they are both set on Earth… an odd basis for a collection, given that there are so many Doctor Who episodes set on Earth.

Odd coupling aside, this is a pretty terrific release.

“The Gunfighters” is a four-part William Hartnell story from the show’s third season in 1966. Back then, the Doctor was more prone to frailties, and the story begins with him seeking out the services of a dentist due to a severe toothache. This urgent need lands the Doctor and his companions, Dodo and Steven, in the Wild West town of Tombstone, a day before the famed gunfight at the OK Corral. The Doctor is soon mistaken for the infamous Doc Holliday and much adventure and bad American accents ensue.

The story suffers a bit from being set-bound and there is an air of uncertainty to Brits attempting to do Wild West USA. But these small quibbles aside, it’s actually a really good story. The guest cast, despite some dodgy accents, are excellent — particularly Anthony Jacobs as the real Doc Holliday. The use of “The Ballad of the Last Chance Saloon” to punctuate important moments in the story, adds a nice touch of atmosphere. Despite much drama and death, there is also a thread of humour that runs throughout.

This story is often noted as being one of the most unpopular of all time. I’m baffled as to why. Strong performances, solid writing and well-paced direction make it, in my humble opinion, a damn fine story.

“The Awakening”, with Peter Davison as the fifth Doctor, is from the show’s 21st season in 1984. The Doctor, Tegan and Turlough arrive in the English village of Little Hodcome, in the middle of an historical re-enactment of a civil war battle. But hidden in the local church is an alien entity called the Malus. Harnessing the psychic energy of the locals, it creates a time distortion, linking 1984 with 1643, and taking control of the re-enactment organiser. It seems that the village is set to relive the civil war battle, for real — unless the Doctor can save the day.

At only two parts, it’s quite a short story and suffers a little from a rather abrupt and ill-conceived conclusion. But aside from that, it’s a reasonable adventure with some interesting characters and excellent guest stars. Keith Jayne as Will Chandler, a teenage boy accidentally transported from 1643 to 1984, is particularly engaging. There is much talk on the disc’s extras as to whether or not he was mooted as a possible companion. Despite script editor Eric Saward’s insistence that he would not have worked as a companion because he would have been too difficult to write for, I think he would have been brilliant. Yes, his character may have needed the writers to think a little more outside the Doctor Who norm… but I think that would have been a good thing.

As usual, there are a heap of extras on these discs, with commentaries (both are interesting but unremarkable), ‘making-of’ docos and other retrospectives. One of the highlights is the set of deleted scenes and outtakes from “The Awakening”. The packaging is probably the standard plastic cases within a cardboard slipcase arrangement (my discs came minus the packaging).

DVD review – Doctor Who: Mara Tales DVD love… but not in a kinky way