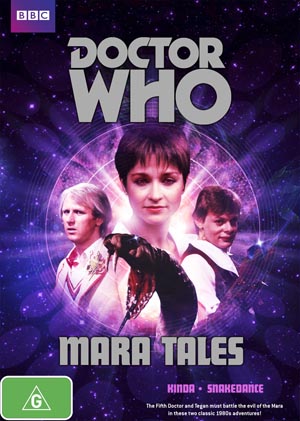 “The Fifth Doctor and Tegan must battle the evil of the Mara in these two classic 1980s adventures!” Thus proclaims the slipcase on this two-story box set. But are “Kinda” and “Snakedance” really classics of this Doctor Who era?

These two stories seem to divide Doctor Who fans. Some will praise them for their intellectual approach and their attempt to do something a little different. Others will pan them for being confusing and for having some particularly unconvincing special effects. Now, finally, you can read my opinion.

“Kinda” is from Doctor Who’s 19th season and is the third story to feature Peter Davison as the Doctor. Playwright Christopher Bailey used his interest in Buddhist philosophy as the basis for this introspective and esoteric story.

The Doctor, accompanied by Tegan, Nyssa and Adric, lands on the planet Deva Loka. Nyssa is left with the TARDIS and doesn’t feature in the rest of the story. The evil Mara possesses Tegan and uses her to cross from the unconscious, dreaming world it inhabits, into the real world, where it threatens the native inhabitants of Deva Loka, as well as the Earth colonists. Meanwhile, the colonists are having troubles of their own, with missing team members and the growing insanity of the second-in-command. Of course, it’s up to the Doctor to put things right.

“Kinda” is a well-written and interesting story. Bailey is adept at weaving myth and the “evil in all of us” theme into an engrossing science fiction tale. His unfamiliarity with Doctor Who does make for a couple of out-of-character moments, most notably, the Doctor being confused by a simple magic trick performed by Adric. I can’t help but feel this is fault of the script editor, who really should be fixing up these sorts of issues.

The highlight of this story is that it gives actress Janet Fielding a well-deserved moment in the spotlight. Her performance as Tegan is often dismissed as loud-mouthed and annoying, but this story shows a real depth of performance — particularly the dream sequences and her possession by the Mara. “Kinda” is also noteworthy for its brilliant guest cast. British film star, Richard Tod, plays the colonists’ commander with gusto and conviction, while Simon Rouse delivers a strong, almost (but not quite) over-the-top performance as his second-in-command. Mary Morris as the blind wise-woman, Panna, is also excellent.

What lets this story down, are the rather abysmal effects at the climax. When the Mara is finally given physical manifestation, it is as a giant snake — a giant, unconvincing puppet snake. But really, there have been bad effects in Doctor Who before and since. While they certainly made me chuckle, they didn’t stop me from enjoying the story. And if it really bothers you, you do have the option of watching this sequence with newly created CGI effects. (Although, I think the insertion of new effects is a rather pointless exercise, creating a sequence that no longer looks of its time.)

“Snakedance” is a sequel to “Kinda” and is from the following season. Tegan once again falls under the influence of the Mara, this time on the planet Manussa. Mixing myth, history and culture, Bailey attempts to extend the themes and plot of the previous story. This time, however, with less success. While there are some interesting elements to the story, it generally seems at odds with “Kinda” and the Mara has now become more of a standard villain.

“Snakedance” attempts to recreate the casting of “Kinda” with some pretty good actors. Of particular note is a young Martin Clunes, who really camps it up as the Mara-possessed Lon. Unfortunately the effects are not much better than first story, and the direction is more stagey and less convincing. The performance of the regular cast is also below-par, which is particularly noticeable with Janet Fielding, whose layer performance in the first story degenerates into caricature with this one.

Even though both stories are one-disc editions, there are lots of great extras in this set. The making of docos on both stories are excellent and give you some in-depth info on the writing and production. It’s really interesting to listen to the difference of opinions between the writer, Christopher Bailey, and the script editor, Eric Saward — with Saward always leaning towards the pedestrian. The commentaries on both these stories are fab! Peter Davison (the Doctor), Janet Feilding (Tegan), Matthew Waterhouse (Adric) and Nerys Hughes (guest cast) on the first, and Sarah Sutton (Nyssa) on the second in place of Waterhouse and Hughes. It’s a joy listening to these actors reminisce and joke around.

There is also a great eater egg on the “Snakedance” disc, concealed in the audio options menu. It’s a fourteen-minute interview with Christopher Bailey, conducted by Robert Shearman, who wrote the ninth Doctor episode “Dalek”. This is such an interesting interview (for Shearman’s opinions as much as Bailey’s) that it’s a real shame it is hidden away where most viewers won’t find it.

The packaging on this box set is the same as past sets — each story in an individual case with cover, then both cases in a cardboard slipcase.