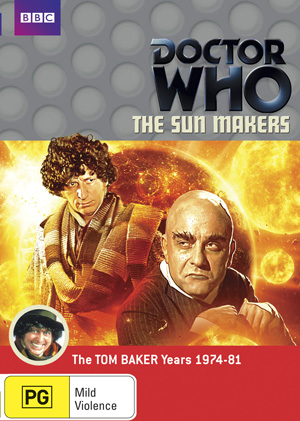 “The Sun Makers” is a four-part story from the fifteenth season of Doctor Who, with Tom Baker as the Doctor and Louise Jameson as his companion Leela. Written by the script editor, Robert Holmes, it is an inventive and clever story that satirises commercialism and bureaucracy while maintaining an interesting science fiction plot. Apparently inspired by Holmes’s trouble with the tax department, it is as relevant today as it was in 1977.

In the far distant future, Pluto has been colonised by the Company. There are six cities, each with its own artificial sun (and that’s about as much connection that there is to the story’s title). The population are controlled and exploited and taxed by the Company — its only concern being to make greater profits. But rebellion is stirring in the lower levels, and with a little help from the Doctor, the dominance of the Company is soon to end.

This story is filled with witty dialogue and caricature characters. Richard Leech is superbly pompous as Gatherer Hade, the Company official who devises new ways of taxing the populous; while Henry Woolf as the Collector gives a very cockroach-like performance as he sends up the stereotypical banker. The two of them work particularly well together. Hade uses a host of amusing, and increasingly ridiculous, terms to address the Collector — from “Your Enormity” to “Your Supernal Eminence”; from “Your Elevation” to “Your Omniscience”; from “Your Sagacity” to “Your Orotundity”. But it’s the Collector who gets the best lines…

“Grinding oppression of the masses is the only policy that pays dividends. “

And as he waits for Leela to be publicly executed (by being steamed alive) be says: “This is the moment when I get a real feeling of job satisfaction!”

As a counterpoint, David Rowlands puts in a sympathetic and down-to-earth performance as Bisham, the man driven to suicide by the overbearing taxes he is unable to pay. It’s also worth noting the appearance of Michael Keating (better known as Vila from Blakes 7) as Goudry, one of the rebels. Tom Baker and Louise Jameson are in top form, and K9 is well used.

With the exception of a couple of the action scenes, the whole thing is quite well directed by Pennant Roberts. The story has an interesting look and feel, thanks to some great location shooting and the vaguely Aztec elements introduced by designer Tony Snoaden. Some things have dated somewhat, like the references to Pluto being a planet and the gigantic key card used to get money from the bank, but they add an air of nostalgia rather than being a distraction. All up it’s an excellent story and a great example of the Tom Baker era.

There are a good batch of extras, with a making-of doco (“Running From the Tax Man”), a doco about composer Dudley Simpson and some outtakes (just the one scene, continually stuffed up) and photos. The commentary features Tom Baker all the way through with, Louise Jameson, Michael Keating and Pennant Roberts joining him for selected episodes. It’s an interesting and fun commentary, with Baker living up to his eccentric reputation… he certainly seems to have a great time amusing himself.

This DVD is an excellent release and highly recommended for both fans and casual viewers.