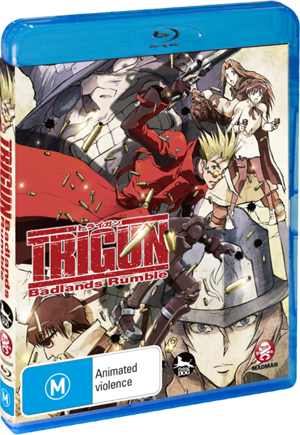 Vash the Stampede is back! The Humanoid Typhoon has progressed from manga to anime series and now finally to his own feature film. And it’s just been released on Blu-ray.

Vash the Stampede is a gunslinger with a bounty on his head, living in a strange land that is part Wild West and part quasi-futuristic. Nicknamed the Humanoid Typhoon, he is known and feared for the destruction he has caused over the years. But all the mayhem he is responsible for is the result of him trying to help people. He always does his best to protect the innocent and to never kill anyone… but somehow, this always seems to result in massive amounts of property damage. So much so, that he’s usually pursued by two insurance agents.

Twently years ago, Vash saved the life of a bank robber named Gasback and set into motion a series of events that would come back to haunt him. Gasback is now out for revenge against his fellow bank robbers, while bounty hunters from far and wide are gathering to try and kill him. And into the middle of all this, steps Vash — still trying to protect life; still inadvertently causing mayhem.

I’ve never read the original manga series of Trigun, but I am a fan of the TV series. So in reviewing Trigun: Badlands Rumble, there are two ways for me to look at it — firstly as a film in its own right, and secondly as an extension of the television series.

If you’ve never seen the TV series, that’s not a problem. This film assumes no prior knowledge. The story is self-contained and rolls along at a cracking pace. It’s funny, exciting and even dramatic in places. The animation is stylish and the soundtrack excellent. The characters are enigmatic and interesting, while the setting is odd and fascinating. The film is a really enjoyable and accessible watch.

As a fan of the TV series, I found Trigun: Badlands Rumble a little lacking. It positioning within the timeline is unclear. It’s not set prior to the series as the characters already know each other. And it’s not set after the series, as one of the main character isn’t dead yet. But there isn’t an obvious spot within the series that it fits. It’s as if the makers have ignored the timeline of the TV series altogether.

All the main characters of the series are reunited and their interaction is excellent. They are an engaging set of characters and its great to see them back in action. The new characters are also good. Gasback is a terrific villain, and his obsession with the integrity of his robberies is fascinating. The bounty hunter Amelia is more than she first appears, and the revelations about her character are well handled.

Despite all the good things, the film doesn’t quite have the spark of the series — probably because the character subtleties and complexities established in the series are hard to convey in a 90 minute film.

One of the elements of the TV series that I enjoyed most was the mysterious origins of Vash. I won’t go into it here, other than to say that things are revealed bit by bit over the course of the 26 episodes, until we finally find out who he really is. This element is almost entirely absent from the film, the only reference being how Vash hasn’t aged in twenty years. I understand that this would have added a level of complexity that may have put off the casual viewer, but it was such an integral part of the series that I really missed having it in the film.

My fannish quibbles aside, this is a pretty damn good animated film. Highly recommended! And it looks stunning on Blu-ray! If you have the choice between DVD and Blu-ray, go the latter.

The disc, which comes in a standard Blu-ray case, has LOTS of extras — “Over 130 minutes of extras” as the packaging proclaims. I admit that I haven’t made it all the way through yet. There are lots of informative interviews with the cast and crew, but the lightning fast subtitles are often hard to keep up with. There’s also a chat with cast at the premier and lots of trailers and promos. Great stuff!

Released on Blu-ray and DVD in Australia by Madman.

I haz Blu-ray! DVD review — Doctor Who: The Sun Makers