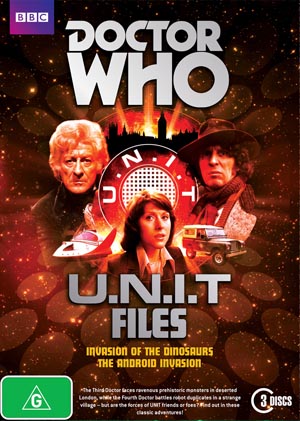 U.N.I.T. Files is a box set with two stories featuring the United Nations Intelligence Taskforce — “Invasion of the Dinosaurs” and “The Android Invasion”. Both these stories, despite some flaws, are very watchable and are great examples of their respective eras.

“Invasion of the Dinosaurs” is a six-part story from Jon Pertwee’s final season in 1974. It is much talked about for its rather shoddy dinosaur effects. Granted, the dinosaurs are pretty dreadful, but Doctor Who has suffered from poor effects before and since. I can live with the effects given the strong performances from the actors, who make you believe that what is obviously a puppet is actually a Tyrannosaurus Rex. It also helps that it is an excellent story, examining the age-old dilemma — does the end justify the means? Its only drawback, apart from the effects, is that it’s a little too long, with much of episode five being a rather pointless, extended chase sequence. Five episodes would have delivered a tighter, better-paced story.

The third Doctor and Sarah Jane Smith, on her second trip in the TARDIS, arrive in an evacuated London that is under martial law, where prehistoric creatures are randomly popping up to cause havoc. Although U.N.I.T. and the Brigadier are there, they are under the command of the regular army’s General Finch. The Doctor soon discovers that the dinosaurs are merely a diversionary tactic, as a group of fanatics in an underground bunker work at perfecting a time machine with a difference — the device will turn back the clock, taking the Earth (and a select few human beings) back to prehistoric times, thus countering the effects of pollution and mismanagement, at the expense of billions of people… who will never have existed. It’s an interesting idea that explores the notion of fanaticism at various different levels, from the instigators to the easily lead to those unaware of the means being used.

“Look, I understand your ideals. In many ways I sympathise with them. But this is not the way to go about it, you know. You’ve got no right to take away the existence of generations of people.”

This story is particularly interesting for regular Doctor Who viewers in its development of U.N.I.T.’s Captain Mike Yates. An important story in his character arc, Yates changes teams from the good guys to the bad guys, albeit with the best of intentions. This story then directly leads to his participation in the Pertwee swansong “Planet of the Spiders” later in the season.

“The Android Invasion” is from Tom Baker’s second season in 1975. At four episodes it is well-paced and exciting. Unlike “Invasion of the Dinosaurs”, the effects work in this story is rather good. The uncovered android faces are used sparingly and to good effect. And the design of the controlling aliens is convincing.

The Doctor and Sarah arrive in what appears to be a deserted English village. They soon discover it is filled with android replicas, and that the village isn’t even on Earth. It’s a training ground for an upcoming invasion. Aside from the giveaway title, this story is plagued with little continuity and logic problems. How does the Doctor use his android duplicate after all the androids have been deactivated? What happens to the invasion fleet at the end of the story? And my personal choice for most ridiculous subplot — astronaut Guy Crayford’s missing eye, that isn’t really missing. Are we really expected to believe that he never lifted his own eye-patch? Surely he washed his face on at least one occasion? It’s an annoyingly daft detail that goes a long way towards ruining credibility. And yet, somehow, despite these stuffed-up details, it’s still an enjoyable story.

“The Android Invasion” is notable for being the last of the U.N.I.T. stories, containing the final appearances of Ian Marter and John Levene as Harry Sullivan and Sergeant Benton.

Something that both “The Android Invasion” and “Invasion of the Dinosaurs” have in common is an excellent cast. The regulars are in top form, with Elisabeth Sladen working particularly well with both Jon Pertwee and Tom Baker. And the guest cast is top notch.

There are lots of really good extra features in this box set, include making-of docos for both stories, a featurette about producer Philip Hinchcliff’s “life after Who”, and an interview with Elisabeth Sladen. The vintage Wheeabix commercial is a good laugh, but the hidden extras are not worth the effort of trying to find them. The commentaries are a mixed bag. The commentary on “The Android Invasion” features a variety of people and is entertaining. The commentary on “The Invasion of the Dinosaurs” is odd. Some of the episodes feature numerous cast and crew in discussion, but three of the episodes have director Paddy Russell in conversation with interviewer Toby Hadoke. Despite Hadoke’s valiant efforts to elicit more than one-sentence answers from Russell, she is quite unsuited to a solo commentary, providing lacklustre and sparse comments.

All up, this is a great release — a good one for casual viewers as well as for fans.

The Doctor Who: U.N.I.T. Files box set is released on DVD in Australia by Roadshow Entertainment.