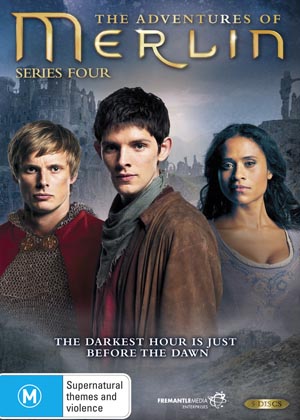 The Adventures of Merlin — this hugely successful series about Merlin and Arthur in their younger days is back for a fourth season. Building on the progression of the myth from season three, this season heads further towards the legend we are familiar with, but also substantially deviates from it. Lots of interesting things happen, and yet I found this season disappointing compared to the previous.

I’ve got to apologise and warn people that this review contains a few SPOILERS. Regrettable, but necessary… deal with it!

Season three (see my review) really thrust the series forward into new territory, paving the way for the Arthurian legend people are familiar with. This season follows on from that, again pushing things forward in both expected and unexpected ways. In this season, Uther dies and Arthur finally becomes the King of Camelot. Sir Lancelot sacrifices his life to save Arthur. Against advice, Arthur proposes to the servant girl, Guinevere … but Gwen betrays him with a resurrected Lancelot. All gripping stuff — the sort of plot lines that should have made this season brilliant.

Unfortunately, this season suffers from a great deal of inconsistency, lapses in logic, misplaced humour and generally sloppy attention to detail. So, in one episode you have Merlin and Gaius reluctant to tell Arthur about the magical reasons behind that episode’s mayhem, and yet the very next episode they have no qualms about confiding in him. Season three built up the relationship between Arthur and Merlin to the point where mutual respect was definitely developing… and yet this season sees the return to the slapstick king/servant banter of earlier episodes. Being a family show, there has always been a certain element of childish humour to the series. It’s not something that has particularly bothered me, but I’ve always felt the series was at its strongest when it was being dramatic. This season we have some pretty dark story elements coming through, but the humour (rather than being used in light-hearted episodes) has been inserted into the middle of the dark plotlines. The emotion in the episode in which Uther dies, is short-changed by the misplaced slapstick humour that pervades.

There are also some characterisation problems in this season. Morgana has now completed her transition from trusted King’s ward to villain. Unfortunately this is accompanied by the shedding of her character complexities. She has gone from the intriguing, multi-layered character of seasons past, to a pretty standard one-dimensional villain (with the exception of one lovely exchange between her and Merlin about their lost friendship). Her wardrobe is now predominantly black and she’s acquired a push-up bra.

With Morgana now out of Camelot, a new subsidiary villain is introduced in the form of Lord Agravaine, Arthur’s uncle. His motives are never fully explored and neither is his origin. He just suddenly appears in the first episode without explanation. There has never been any mention of an uncle in the past.

All these little things combine to make this season less satisfying than the last. It’s by no means bad, just not as good as it should have been. Certainly there are also lots of positive things about this season as well. Production values have continued to rise, and the guest cast is magnificent. Even though I have reservations about the character of Lord Agravaine, Nathaniel Parker plays him with a great deal of enthusiasm. It’s also good to see the return of the aged Merlin from season three. Colin Morgan does extraordinarily well behind the aging makeup and delivers a very convincing performance.

All up, I enjoyed this season. I’m just sorry that it did not live up to its potential.

There are some good extra features on this five-disc set, including a making-of doco, outtakes and quite a number of deleted scenes (I love deleted scenes). There are also some reasonable commentaries on five of the episodes. Those with director Alice Troughton are particularly worth listening to. I’ve no idea what the packaging is like this time around as my review discs were naked.

The Adventures of Merlin is released on DVD in Australia by Roadshow Entertainment.