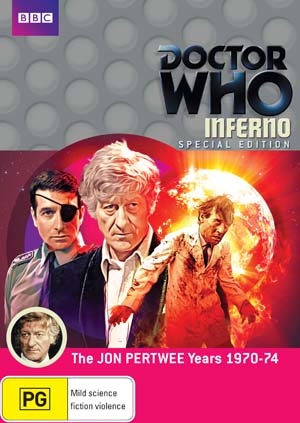 This is 1970s Jon Pertwee era Doctor Who at its best. “Inferno” combines a strong plot with a great sci-fi concept and strings it all together with some exceptional characterisation.

The Doctor and Liz Shaw have accompanied the Brigadier to an experimental drilling facility, where Professor Stahlman is attempting to drill into the Earth’s crust in search of a cheap energy alternative. But things are not going well. Stahlman is throwing caution to the wind and ignoring all safety procedures in his endeavours to speed the project along. A mysterious green ooze, released by the drilling, is causing anyone who comes into contact with it to mutate into a salivating, hairy, subhuman Primord. Now, all this sounds like enough… but no… there’s more. Part-way through the story, the Doctor finds himself whisked off to a parallel world — a world in which England is a fascist state; a world where there are some very different versions of familiar faces; a world in which Stahlman’s drilling project is further ahead and much closer to catastrophe.

Despite being seven episodes in length, this story moves along at a cracking pace, never feeling slow or padded. The parallel world storyline makes for some excellent character exploration, as well as providing an added dimension to the drilling plot, allowing it to explore a worst-case scenario.

The guest cast is quite brilliant and the regulars also get the opportunity to shine and flex their acting muscles. Nicholas Courtney as the Brigadier and Caroline John as Liz Shaw get to explore different sides to their characters — the what-might-have been cases under different circumstances. While we get to see a spark of the familiar Liz Shaw in her other-world self, the Brigade Leader is a different kettle of fish altogether. Both these actors do exceptional work with their characters and their scenes with Pertwee are sparkling.

The Doctor : “I keep telling you, Brigade Leader, I don’t exist here!”
Brigade Leader Lethbridge Stewart : “Then you won’t feel the bullets when we shoot you.”

Derek Newark as the drilling expert Greg Sutton and Sheila Dunn as Petra Williams are wonderful, giving us drama and even a little romance. And Christopher Benjamin is superb as Sir Keith Gold. But it is Olaf Pooley as Stahlman who steals the show with a wonderfully aloof and condescending performance.

I only have two complaints about this story, and they’re fairly minor. How did the Doctor’s car come to be in the alternative universe? And why oh why did the make-up people give the Primords those ridiculous plastic teeth? The teeth (which look like the vampire teeth you can buy from a joke shop) are such a let down in what is otherwise a story with good production values.

Back to the good stuff. The stunts are brilliant. The location work is great. The sets are wonderful. The sound design is particularly good, with the constant background sound of the drilling equipment adding to the tension. The script is tight and the direction energetic. This is an all round brilliant story and a great end to Pertwee’s first season, which in my humble opinion is the best season in the show’s history.

Being a Special Edition, the picture quality is better than on the original release and the two-disc set is choc full of great extras. The main commentary is interesting, albeit a little slow, as it was recorded back before they introduced moderators. And the sections with John Levene are entertaining. Lots of great behind the scenes stuff and a really interesting doco about Doctor Who revivals that never made it to the screen. There’s even a deleted scene and a worthwhile easter egg. Great stuff! Go buy a copy!

Doctor Who: Inferno, Special Edition is released in Australia on DVD by Roadshow Entertainment.

DVD Review — The Paradise The reviews are in