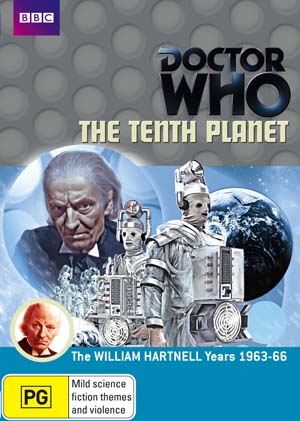 “The Tenth Planet” is a historic story in the long-running Doctor Who series, transmitted in 1966 as part of Season 4. Apart from introducing the Cybermen, who would return again and again in both the original series and the new, this story concludes with the transition from the first Doctor, William Hartnell, to the second, Patrick Troughton. Released for the first time on DVD, the missing final episode has been reconstructed with animation, allowing viewers to watch the complete story.

The Doctor, along with Ben and Polly, land in the far flung future of 1986. 🙂 Earth is under threat from a tenth planet (back in the days before poor old Pluto was downgraded to a Dwarf) that has mysteriously appeared in the solar system. This planet, Mondas, is Earth’s twin, long adrift in space and now returning home. And it is the planet of the Cybermen — cybernetic humans that are ruled by logic. As Mondas saps power from its twin, the Cybermen plot the destruction of Earth and the conversion of its inhabitants. Of course, the Doctor’s here to save the day.

These original Cybermen are a far cry from what they would eventually become. While the gigantic lamps on their heads are a bit silly, there is something eerie about their more human-like appearance, particularly their cloth-covered faces which look almost bandaged. The way they speak is also truly creepy, although often mistimed. And unlike future Cybermen, these guys really are emotionless…

“Come to Mondas and you will have no need of emotions. You will become like us.”

As a piece of Who history “The Tenth Planet” is fascinating, but as a story in and of itself it’s not that great. Credibility is stretched to breaking point with Mondas, character motivations are somewhat muddy and there are plot holes. There is also some clunky staging (particularly the ‘action’ scenes) and some not-so-great acting. Despite all this, it still manages to be entertaining.

The final scenes, where the Doctor regenerates (although it’s not yet called that) are definitely worth waiting for. The regeneration is in the animated episode, but the live action scene can also be viewed in the extras. It’s a truly historic moment in the evolution of the series.

It’s a pity William Hartnell didn’t get a greater part to play in his swansong, as he is absent for all of episode 3 (due to illness). But while he is there, he is giving it is his all and it’s a great final performance. Ben and Polly, not so much. I guess I’m biased here in that I think they were the weakest of Hartnell’s companions. Unfortunately the guest cast isn’t wonderful either. Being set at an international polar base, the story comes complete with atrocious accents and clichéd characters (sometimes both at the same time — there’s an Aussie named Blue and an Italian with girly pics on his wall). Then there’s the over-acted military commander. Sigh.

Lots of fantastic extras on this two-disc release to keep fans like me happy. A making-of doco, a great little interview with William Hartnell being cranky and lots of other bits and pieces. The commentary with numerous cast and crew moderated by Toby Hadoke is really good… but unfortunately is only on the live action eps. It would have been nice to include the final animated episode.

All up, this story is really interesting from a Who history perspective and I really enjoyed watching it in. But it’s certainly not a story I’d show to a casual viewer.

A Letter to Steven Moffat 5(ish) Highlights of #SaveTheDay