I know this is meant to be my writing blog, but I simply cannot let the 50th Anniversary of Doctor Who go by without a post. And so, with the anniversary weekend now over, here are my personal highlights…

1. The special programming
I loved watching “The Night of the Doctor”, “The Last Day”, “The Day of the Doctor”, “An Adventure in Space and Time” and “The Five(ish) Doctors Reboot”; and I loved listening to “The Light at the End”. Individually, they were all great; but put together, they made for a truly memorable 50th Anniversary for what I consider to be the best television series ever made.

2. The TARDIS cookie
Getting up on #SaveTheDay morning and eating a TARDIS cookie with my daughters. Despite being disappointed at it not being bigger in the inside, it was still a lovely moment.

3. Re-watching old eps with friends
After watching “The Day of the Doctor”, my family and I headed off to a Doctor Who gathering at the house of a friend with a home cinema room (complete with, believe it or not, a ticket booth). We watched the original unscreened pilot, “An Unearthly Child” and “The Five Doctors” before moving on to a re-watch of “The Day of the Doctor”. It was lovely to share the experience with friends.

4. Freaking people out with this photo… 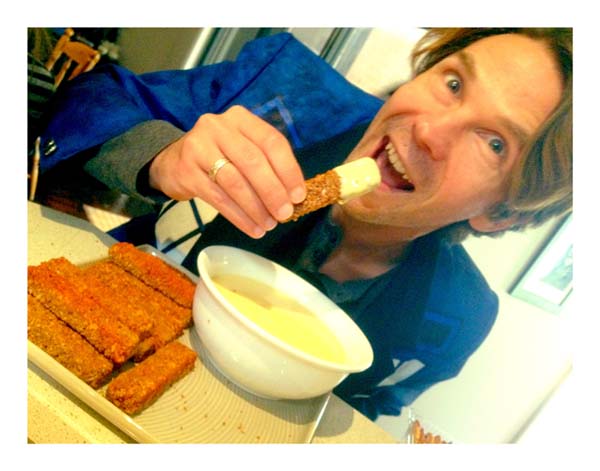 Fish fingers and custard! When first offered this delicacy at the above-mentioned Doctor Who gathering, I was unsure… but in the end I took the plunge. Several chews in, I realised that the ‘fish finger’ tasted of chocolate. 🙂 It was made from a chocolate truffle mix and covered in biscuit crumbs. Very tasty!

5. Sitting back after it was all over and realising what an unprecedented event this was.
Never before have I seen this sort of hype over a television series. The closest thing I can equate it to is the release of Star Wars Episode 1 (although that turned out to be a MASSIVE anticlimax). So different from the 20th Anniversary (yes, I remember it well), when the general public didn’t give a hoot; when ‘normal’ people pointed and sniggered at the weirdoes celebrating a TV show. It seems that Doctor Who has transformed from a series with a cult following to a mainstream phenomenon — and with #SaveTheDay, that regeneration is now complete.

During the time of the classic series, here in Australia, we would have to wait ages for the new eps to show up — screening long after their UK debut. But “The Day of the Doctor” was simulcast in 94 countries. It was awarded a Guinness Word Record for largest ever simulcast of a TV drama.

In years gone by, I would get mostly blank looks if I were to mention being a Doctor Who fan during a school talk. These days, I bring my sonic screwdriver with me because the kids love it.

Ten years ago, if I wanted to discuss Doctor Who, I’d have had to go to a Doctor Who or science fiction club to find like-minded people. But earlier this month I was invited to talk about it at a spoken word night organized by the Melbourne Library Service.

How things have changed! I love it!