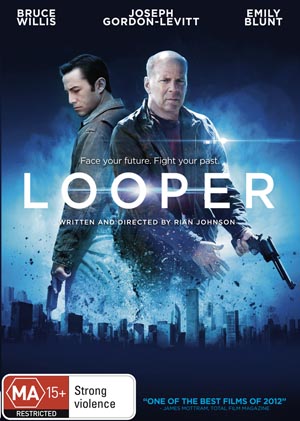 Looper would have to be one of the best time travel films ever made. It’s slick and entertaining. It is both thoughtful and thought-provoking. And you’re never really 100% certain how it’s going to end.

It’s a great premise that makes for a gripping action/adventure as well as an intelligent exploration of science fiction concepts. All sorts of issues are gone into, from morality to time travel paradoxes to the possibility of changing the future. And for good measure the human development of telekinesis is also thrown in. This is all given to us through the eyes of complex and interesting characters. There is so much to think about and enjoy in this film.

Joseph Gordon-Levitt plays Joe, the film’s central looper, while Bruce Willis plays his future self. It’s a typically good performance from Willis. And Levitt makes a convincing younger Willis. They felt like they could actually be the same person. The rest of the cast are also great, particularly Emily Blunt and Jeff Daniels.

Plot, concepts and character are all wrapped up in a good-looking, well-directed package. Highly recommended, even if you’re not normally into time travel films.

The DVD release is good, with a great commentary featuring the writer/director (Rian Johnson), Emily Blunt and Joseph Gordon-Levitt, deleted scenes (with commentary that features Noah Segan, many of whose scenes were cut) and a stylish animated trailer. Particularly interesting is “The Two Joes”, a little featurette on the make-up process that Joseph Gordon-Levitt went through to make him appear like a young Bruce Willis. But apparently the Blu-ray release is better, with more extra features. I REALLY HATE IT when they put less on the DVD. It’s very unfair for those who do not have Blu-ray.

Looper is released in Australia on DVD and Blu-ray by Roadshow Entertainment.