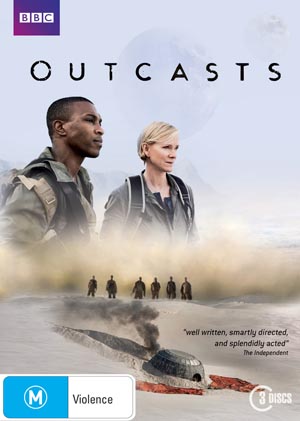 The most annoying thing about the BBC series Outcasts is that there won’t be any more episodes after this first season of eight. Due to low ratings and poor reviews it has been cancelled. It’s a real pity. While this first season wasn’t brilliance all the way through, it was an intriguing science fiction drama that showed a great deal of promise.

Set in the year 2060 on the planet Carpathia, Outcasts revolves around an Earth colony in the pioneer town of Forthaven. Settled ten years ago, the colonists now live without contact with Earth, which is a five-year journey away. But they are expecting further colonisation ships to arrive. When the first of these arrives, unsure if it will even be able to survive a landing, it brings with it an unexpected passenger who will stir up the colony’s equilibrium.

The regular cast is first-rate, with Hermione Norris (Cold Feet) as Dr. Isen being a particular highlight. The supporting cast is variable. Jamie Bamber (Apollo from the new Battlestar Galactica) over-acts something shocking in the first ep, while Eric Mabius overplays the sinister aspect of villainous Julius Berger. Although, to be fair to Mabius, the direction also over-emphasises the sinister moments with Berger — so he was probably told to play it that way.

Shot in South Africa, the series looks fantastic — lots of sweeping, desolate landscapes. The production values are great, with convincingly run-down colonial sets and some terrific visual effects work. The writing is quite good despite the occasional hiccup. The plot is convincingly built up over the course of the episodes with some nice revelations. But it’s the characters that really make this show. They are flawed, make questionable decisions and are sometimes not at all nice — they are believably human.

As I said at the start, the greatest problem with this series is that there is no more. The season builds to a climax, revelations are made, and things are set up for the next batch of episodes… which shall never be. There is no closure. Damn irritating!

There’s not much here in terms of extras — a basic ‘making of’ doco and a 5-minute set tour. I’m afraid I can’t review the packaging as my review discs were unclothed. 🙂

Released on DVD and Blu-ray in Australia by Roadshow Entertainment.