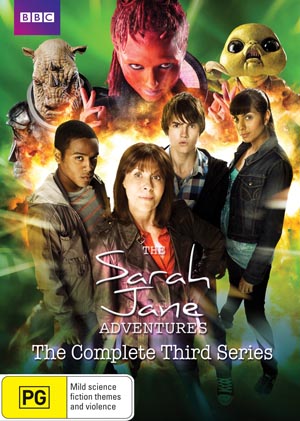 This DVD set has been waiting quite some time for me to watch and review it. I’ve been avoiding it ever since Elisabeth Sladen died earlier this year. But I couldn’t avoid it forever, and so I finally sat down and watched it. I’m very glad that I did… Because although Ms Sladen is gone, Ms Smith will live on.

Sarah Jane Smith is my all-time favourite Doctor Who companion. Since leaving the series in 1976, the character has continued to pop up — most notably in K9 and Company, “The Five Doctors” and “School Reunion”. And then in 2007 she finally got her own spin-off series, The Sarah Jane Adventures.

I have mixed feelings about The Sarah Jane Adventures. It has been undeniably brilliant to have Elisabeth Sladen and Sarah Jane regularly on the TV, but the series itself is often far from brilliant. While I really enjoyed the pilot, I thought the first series was a little disappointing. The second series was better. And I’m very pleased to report that the third series is better still.

The concept of the series is that Sarah Jane, investigative journalist, teams up with three local teens to defend the Earth from extra-terrestrial forces. The teens include the genetically engineered Luke, who Sarah Jane adopts as her son, 13-year-old neighbour Maria and their school friend Clyde. After the first series Maria leaves and is replaced by the new neighbour, Rani. They are assisted by an alien super computer that has been jokingly named Mr Smith, and robot dog K9 (although he spends much of the series off protecting the Earth from a black hole).

Series three features six two-part stories. First up is “Prisoner of the Judoon”, a competent but unremarkable story in which Sarah Jane and the kids team up with a Judoon captain in order to capture an escaped alien prisoner. A force to be reckoned with in Doctor Who, the Judoon are a race of intergalactic police. But in this story they have been dumbed down and made rather ineffectual in order to facilitate some rather ham-fisted humour. On the plus side, the alien prisoner makes a good villain with interesting motivations. Sladen also seems to really enjoy being evil, when possessed by the alien.

“The Mad Woman in the Attic” is a more intriguing story, dealing with altered time-lines and a stranded alien who kidnaps people so she can play with them. At its heart, this is a story about friendship and loneliness. It’s well written and gives us a little glimpse of Sarah Jane’s loneliness, something that is examined further in the next episode. At the end of the story Sarah Jane says…

I spent so many years alone, I still find it difficult to trust people, but you know, they’re not all out to get us and sometimes I forget that.

“The Wedding of Sarah Jane Smith” is the series highlight. Guest starring David Tennant as the Doctor, it provides some great insight into Sarah Jane’s character and paints her in a somewhat tragic light. It is devastatingly sad. The storyline involves Sarah Jane falling in love and getting married… but (SPOILER ALERT) her fiancé turns out to be controlled by the alien Trickster (a villain that’s previously appeared in the series). Even though everything gets resolved in the end, I was left with an overwhelming feeling of sadness for Sarah Jane. Would she ever find happiness? Was she destined to always be lonely? After spending so many years missing the Doctor, she finally finds love… only to have it snatched away from her. Early in the first episode, Sarah Jane explains her lack of romantic involvement…

Men were interested before… but then I’d think, “How can a relationship go anywhere with my bizarre life?”

“The Eternity Trap” is a rather good haunted house story with a ‘science versus supernatural’ theme. “Mona Lisa’s Revenge” is a fun story about the Mona Lisa coming to life with a spirited performance by Suranne Jones as Mona. Unfortunately the final story, “The Gift”, is the weakest of the series. The family Slitheen from the planet Raxacoricofallapatorias (try saying that three times… or even once) first appeared in Doctor Who. They have since made a few disappointing appearances in The Sarah Jane Adventures. And now they’re back again. The story is okay, but these aliens have been way over-used in the series and lack any real sense of threat.

All up, The Sarah Jane Adventures is a great kids’ show with much to offer an adult audience as well — especially fans of Doctor Who. Series three is definitely the best so far and well worth owning.

The DVD release has little to offer beyond the actually episodes. There are no extras other than a short audio book extract, which is little more than an advertisement for the CDs. Given that its parent program, Doctor Who, gets such lavish treatment with lots of extra features on every disc, the treatment of The Sarah Jane Adventures is quite disappointing. I can only hope that series four and five will fare better.

The death of Elisabeth Sladen is one of only two celebrity deaths that have ever made me shed a tear (I blogged about it at Literary Clutter — “Famous Dead People”). She died during the production of the fifth series of The Sarah Jane Adventures, completing only half the episodes. So there are only one and a half more seasons to be released on DVD before The Sarah Jane Adventures ends, and we say farewell to Ms Smith. Although I am looking forward to the release of series four and five, I am not looking forward to saying goodbye.