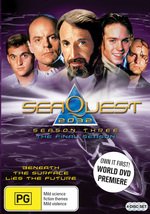 The third and last season of seaQuest has finally made it onto DVD in Australia. Yay! I’ve been waiting for this for quite a while, as I have never seen it before. When originally screened in the 1990s it was shuffled from one timeslot to another and I lost track of it towards the end of season two. So, with the release of season three, I went back to the start and re-watched the first two before starting on this one. And in order to properly review this release, I’m also going to talk a little about the first two.

Created by Rockne S. O’Bannon (Farscape) and executive produced by Steven Spielberg, seaQuest is a rather odd series that has seen quite drastic changes from season to season. The first season introduced us to the crew of the seaQuest DSV (Deep Submergence Vehicle), headed by Captain Nathan Bridger (Roy Scheider). A combination of science vessel and quasi-military submarine, the seaQuest, under the direction of the UEO (United Earth Oceans Organization) patrols the seas of the future (around about 2020) to keep the peace and investigate various scientific and environmental phenomena. The series aims for stories of human drama against a background of realistic environmental issues, and each episode concludes with a bit of a science lesson about various forms marine life. The first season tries really hard and shows reasonable potential, but suffers from lack of character development and being overly earnest in the treatment of environmental issues.

Season two sees some pretty big changes. Several of the regular crew members are replaced, and the stories shift emphasis towards the fantastical. So this season we have everything from vicious aliens to time warps to giant robots. Characterisation becomes very clichéd, dialogue often rather painful and many of the stories are really quite silly. It all culminates in an utterly ridiculous story in which the seaQuest and its crew are transported to an alien planet to assist in a civil war. (This episode guest stars a rather embarrassed looking Mark Hamill as one of the aliens.) And the whole thing finishes with a cliff-hanger — the seaQuest damaged and presumed destroyed, many of the crew dead and most of the others about to die.

Season three sees even more changes. Firstly a title change — from seaQuest DSV to seaQuest 2032. And then some cast changes, including the replacing of Nathan Bridger with Captain Oliver Hudson (Michael Ironside), although Scheider does return for the occasional guest spot. The first episode quickly resolves the cliff-hanger and then gets into the new story. The resolution doesn’t really make much sense, with the aliens saving the seaQuest and most of the crew, putting them into stasis and returning them to Earth 10 years later. But it’s done with quickly and the ten year gap allows for some major changes in setting. Earth is now politically unstable with a cold-war scenario in place — two unfriendly powers making life difficult for the UEO. seaQuest is now designated a purely military vessel and sent out with a new captain to help keep the peace and protect UEO interests.

Season three also surprisingly sees Michael York joining the cast as a semi-regular guest star, playing the president of Macronesia, one of the hostile powers. He seems to relish being the bad guy, and pulls it off with effortless charm.

This season is also remarkably different in terms of writing style. The stories are punchier and more believable, with more complex plots involving politics and diplomacy. But the biggest positive change is the characterisation. All of the characters are treated more like real people than the walking clichés of the previous season — they are given back-stories and emotions and motivations. This is most evident in the character of Tony Piccolo (Michael DeLuise), a wise-cracking ex-con with gills, whose presence in season two is purely as annoying comic relief. In this season we find out what drives him and why he has such a flippant attitude… and the character is allowed to progress beyond this and even given goals to strive for.

The greatest disappointment with this season is that it was ended prematurely — cancelled after 13 episodes, just as one regular character was killed off and a new one introduced, and the ongoing storyline taken in a new direction. Such a shame!

The DVD release is quite ordinary, with no extra features and packaging that doesn’t even list the episodes. I would have loved to see some info about why the changes had been made and what led to the show’s cancellation, or even just some deleted scenes, as they had on the season one release. I guess that the studio simply felt there was not enough interest in the series to give it better treatment.

Released on DVD in Australia by Viavision.