Blu-ray Review — From Up On Poppy Hill 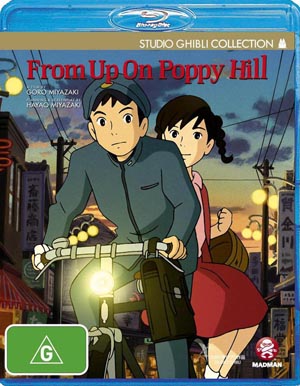 Japan’s Studio Ghibli does it again — another beautiful piece of animated brilliance. Scripted by the legendary Hayao Miyazaki, From Up On Poppy Hill is directed by his son, Goro. It seems that talent runs in the Miyazaki family.

From Up On Poppy Hill is a sweet, gentle romance about two teenagers in Yokohama in 1963. Umi and Shun rally the students at their school to save their rundown clubhouse from demolition by order of the school board, which, like the rest of Japan at the time, is wanting to modernise. As they work on the project, their feelings for each other grow. But, of course, it’s not all smooth sailing, as revelations from the past emerge.

This film is more than just a romance. It’s also about people finding a connection to their past. And it questions the need to modernise at the expense of the past. All this is seamlessly interwoven into the story with subtlety and style.

The film is a visual feast — with every detail, gloriously resplendent on Blu-ray. The story, while not including any of the fantasy elements one comes to expect from most Ghibli films, is delightful. Like many Ghibli films, there is no villain, rather there is a problem to be overcome. There is a great sense of insight in both the visuals and the story. The period detail is lovely. The characters are layered and likeable and feel real. Even the most minor of them is worth observing. The English language cast have been well chosen and add a lot to the characterisations.

The music, by Satoshi Takebe, is worth a mention. It is so infectious and memorable. Perfectly suited to the visuals and the period, it stays with you long after the film is over.

The Blu-ray release is excellent with lots of extra features including a making of doco about the English language version.

This is another must-own Ghibli film! Worth watching over and over again.

From Up On Poppy Hill is released on Blu-ray and DVD in Australia by Madman.