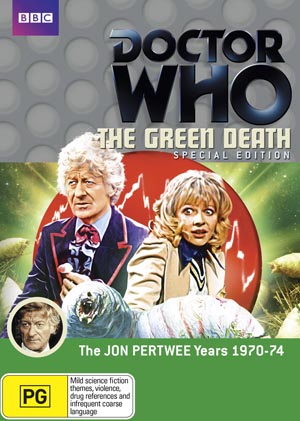 “The Green Death” is the final story of Season 10 from 1973, with Jon Pertwee as the third Doctor. It is an environmental tale, way ahead of its time and, despite some technical shortcomings, holds up very well today.

The Doctor and U.N.I.T. head to the Welsh mining village of Llanfairfach, where dead miners glow with an eerie green hue and the Global Chemicals corporation is recklessly pumping out waste while planning… you guessed it… world domination. Add in a hippy commune, some giant, mutant maggots and an insane computer, and you’ve got a pretty darned good story. The environmental message is clear and it’s the hinge on which the story depends. It is as relevant today as it was back in 1973.

Production wise, this story is a mixed bag. The location filming in Wales is great, but the CSO (green screen work) is terrible — especially the scene where the Doctor and Jo take a cart through a pool of maggots and the numerous shots in the mine elevator, which look particularly dreadful when cut in with the location filming. The maggots themselves are excellent, especially their little mouths with the sharp little teeth. I remember those mouths scaring the crap out of me as kid. Unfortunately after one has pupated, the resultant insect is less than convincing. This story also, on too many occasions, includes the sound of rubbing polystyrene and hollow plastic.

As is pretty standard with the Pertwee era, there is a strong guest cast playing an array of interesting characters. The aforementioned insane computer, The BOSS, voiced by John Dearth, is a highlight. It has a great personality and it’s rather fun listening to it misquoting Oscar Wilde, humming Wagner and saying things like:

“Living dangerously? That’s how you get your kicks like the good little Nietzschean you are.”

But this story, in many ways, belongs to Katy Manning as Jo Grant and Stewart Bevan as Professor Clifford Jones. Jo really gets to shine in this story, demonstrating resourcefulness, integrity and a desire to save the world in her own way. The romance between her and Prof Jones is one of the few believable romances in Classic Who (unlike Leela’s, for example). The chemistry between Manning and Bevan feels genuine — not surprising given that they were a couple in real life. And then, of course, there’s the goodbye…

“The Green Death” is perhaps most notable for the departure of Jo Grant, the Doctor’s assistant for the past three seasons. Even after all these years, after all the multiple re-watching of this story, her farewell still brings a lump to my throat. It is a perfectly handled, bittersweet goodbye. The emotion feels so real, and the departure highlights how much the Doctor needs a companion and how terribly, terribly lonely he is without one. His realisation that all of time and space are not enough to keep Jo with him is quite heartbreaking.

“Jo, you’ve got all the time in the world… and all the space. I’m offering them to you.”

There are so many good stories in the Pertwee era (my favourite Who era) and this is one of the really good ones.

This release is a two-disc special edition, so there are lots of extras. The main commentary, with Katy Manning, Barry Letts and Terrance Dicks, is from the original release, so it suffers a little from the lack of a moderator. But it is still entertaining and informative. Script Editor Terrance Dicks is, as always, particularly entertaining. There are also new additional commentaries on selected eps. The commentary on the final ep, with Katy Manning and Russell T Davies, is particularly worth listening to for RTD’s comments regarding childhood memories of favourite TV shows.

There’s a retrospective making of doco, a visit to the locations as they currently are, some interviews and a number of other interesting things. The strangest is a mockumentary about Global Chemicals, and one of the Easter eggs has a behind-the-scenes moment from it (the other Easter egg is a pointless set of continuity announcements).

The standout extra is the commentary on “Death of the Doctor” — an episode of The Sarah Jane Adventures that features Katy Manning returning to the role of Jo Grant (read my review of The Sarah Jane Adventures: The Complete Series Four). Russell T Davies and Katy Manning are great together. Although they do pay tribute to Elisabeth Sladen, it’s certainly not a 40 minute eulogy or melancholy weepfest. While they acknowledge the sadness of her death, their commentary is a joyous one of remembering the good times. It is fun and insightful and good humoured and respectful. And there are some really interesting tidbits of information about the The Sarah Jane Adventures, including the fact that had the series continued, the character of Luke (Sarah Jane’s adopted son) would have been gay.

An all round excellent release! A must have for fans (really… it’s worth it for the commentary on “Death of the Doctor” alone) and a great story for casual viewers.

Doctor Who: The Green Death, Special Edition is released on DVD in Australia by Roadshow Entertainment.

Blu-ray Review — From Up On Poppy Hill Bicycles and swings