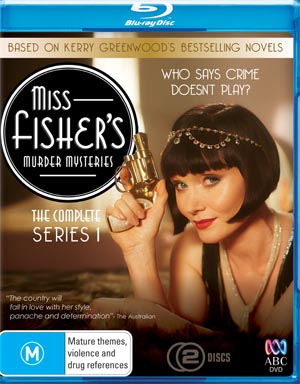 Based on the string of successful novels by Australian author Kerry Greenwood, Miss Fisher’s Murder Mysteries follows the adventures of Lady Detective Phryne Fisher in 1920s Melbourne. Although it deviates from the books in both character and story lines, the television series is very entertaining and enjoyable in its own right.

I’ve only read the first two of the eighteen Phryne Fisher novels, so my knowledge of her literary background is fairly limited. But even so, there are some glaring differences between the books and the series. Some work well, others not so much.

The most obvious difference is Phryne’s age. In the first couple of books she is in her twenties (although she may age as the books continue), while Essie Davis, who plays her in the series, is 41 (although she does look younger). I think this works rather well. Giving the character a greater maturity, makes her self-assured approach more believable. And Davis is rather captivating in the role, embodying Phryne’s playfulness as well as her determination and intelligence.

Her assistant Dot is also well handled in the series, with Ashleigh Cummings putting in a sympathetic and likable performance. The circumstances of her introduction don’t work as well as those in the book, and all the fuss about her being frightened of telephones is a little silly. But her developing relationship with Constable Hugh Collins (Hugo Johnstone-Burt) is delightful.

Bert and Cec, the two communist cabbies who assist Phryne with her investigations, are likably played by Travis McMahon and Anthony Sharpe. Their development, however, is a little slow and they would have benefited from a little more attention. While Tammy Macintosh delivers a good performance as Dr Mac, the character is nothing like what I pictured from the books. For starters, in the series she’s Australian rather than Scottish. My preference is for the character as she appears in the books.

Where the series does better than the first two books, in my humble opinion, is with the character of Police Detective Jack Robinson. He’s a bit nothing in the books, but Nathan Page imbues him with an amiable charm as well as a professionalism and determination. And his slowly developing relationship with Phryne is a joy to watch.

The casting really is spot on, in terms of regular cast and guests. The brilliant Miriam Margolyes is worth a mention as Phryne’s Aunt Prudence (a character not from the books). And it is a delight to see one of my all-time favourite Australian actors, Nicholas Bell (I still remember his excellent performances as Dr. Hellegren in Ocean Girl and Edwin in Hotel Sorrento, back in the 1990s), popping up as the murderous Murdoch Foyle.

Some of the episodes are directly based on Greenwood’s novels, while others are original stories. Fans of the books seem rather upset over the killing off of Phryne’s sister. Despite being alive and well in the novels, the series has had her murdered as a child. This provides the series with a season-long arc, and Phryne with a darker past and also a nemesis in the form of her sister’s killer. In the framework of a television series, I think this works extremely well.

The series is quite well written, although it stumbles in places. Things like when Phryne crashes to the floor after breaking into a house through a window, but the person in the next room doesn’t hear all the noise. Or how her ward seems to only exist in episodes where she is relevant to the plot, but is otherwise absent (and not even mentioned). The scripting gradually improves as the series progresses. Despite the deviations, the series does well in keeping the tone of the books, which never gets too serious. There is a lovely sense of fun, even in the darker episodes.

The series does a great job of depicting Melbourne in 1928. In fact, I would go so far as to say that the city is an important character in Phryne’s world. There are a couple of ambitious CGI shots in the first episode that don’t work wonderfully well, but the less-ambitious shots in latter episodes are seemless. The sets are nothing short of brilliant, as are the location choices. Melbourne has much to offer in terms of period locations, and they are beautifully shot.

All up this is a great television series. I enjoyed it very much. If you like a mystery, or period drama, or simply good stories with a feisty main character, then this series is well worth a watch.

Miss Fisher’s Murder Mysteries is released on DVD and Blu-ray in Australia by Roadshow Entertainment.