DVD Review — Doctor Who: Planet of the Spiders 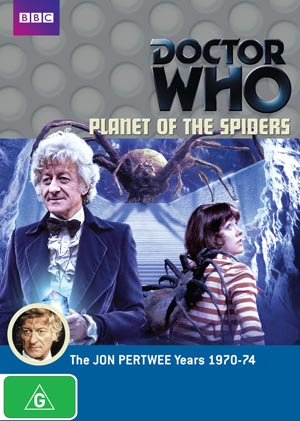 Originally screened in 1974, “Planet of the Spiders” is Jon Pertwee’s six-part swan song. It’s an appropriate end to what is one of my favourite eras of classic Doctor Who. It’s filled with all the elements that made Pertwee’s tenure as the Doctor so watchable — action, adventure, style, chase sequences and monsters.

It’s a fairly straightforward premise — giant spiders from another planet (actually, mutated descendants of ordinary Earth spiders) try to retrieve a powerful crystal that the Doctor took from their planet centuries earlier. The head spider wants it in order to amplify the powers of her mind, which she needs to do in order to achieve her goal of universal domination. But within this simple premise are many interesting and complex ideas.

Much of the story is set in a meditation centre in rural England, run my Tibetan monks, and philosophies of Buddhism play an important role in the story. We have the return of Mike Yates, former U.N.I.T. captain, last seen in “The Invasion of the Dinosaurs”. In this story he gets to make up for the questionable decisions he made in his last appearance. The story also features an intellectually challenged character in a pivotal role. This story adds considerably to the Doctor Who mythos, as we meet a Time Lord from the Doctor’s past. And, of course, there’s the Doctor’s regeneration at the conclusion of the story into Tom Baker. It’s the first time that the term ‘regeneration’ is used to describe the process.

For the most part, the story flows well. It could have been tightened to five episodes, but it still works well enough as a six-parter, rarely feeling padded. The only overly long sequence is the rather pointless chase at the end of episode two. It serves no purpose in the story, as the person being chased always had the ability to escape the situation through teleportation. But, it has obviously been included as parting gesture for Pertwee, who loved vehicles of all shapes and sizes. It is executed with my affection and so I’m more than willing to forgive it. And so the Doctor gets to chase the bad guy in a variety of vehicles, including the Whomobile, a gyrocopter and a hovercraft.

There are many highlights in “Planet of the Spiders”. I love the look on the Brigadier’s face at the theatre when the exotic dancer is introduced — priceless! And the transformation of Tommy, from intellectually handicapped to suddenly intelligent, is handled with sensitivity and pathos. John Kane gives a superb performance in the role, and this scene is so touching. The look on Tommy’s face as he picks up a book to discover that he can read the words is enough to bring a lump to your throat. And then there’s that brilliant bit of dialogue when Sarah Jane Smith realises that Tommy has changed…

Sarah Jane Smith : “You’re just like everybody else.”
Tommy : “I sincerely hope not.”

The rest of the guest cast do a good job, although the casting of Caucasian actors in the roles of Tibetan monks is a little distracting. Jon Pertwee and Elisabeth Sladen really shine as the Doctor and Sarah Jane. There is such sadness in the Doctor’s face as he regenerates, and such concern on Sarah Jane’s, that it really imbues the scene with intense emotion.

All up, this is a fine example of Pertwee-era Doctor Who. And it’s a great two-disc release with lots of extras. Listening to the commentary left me feeling a little melancholic, as it features Elisabeth Sladen and Nicholas Courtney, both now deceased. 🙁 This release is well worth adding to your DVD collection.

Doctor Who: Planet of the Spiders is released on DVD in Australia by Roadshow Entertainment.