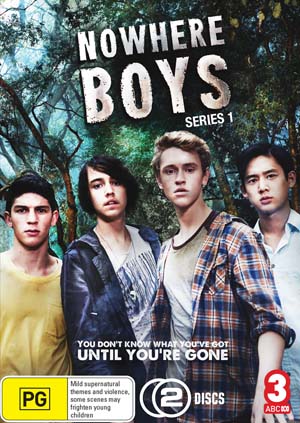 Nowhere Boys is a Melbourne-made teen fantasy/adventure series from ABC3. This first 13-ep season was released on DVD in 2014, with the second coming out this year. It’s a series I heard lots of good things about, so I thought I should catch up with it before the release of Series 2. I’m very glad that I did.

Right from the word go, with the stylish credit sequence and thumping theme (both reminiscent of the weird British sci-fi series Misfits — mind you Misfits is definitely NOT for younger views… see review), you know this series is going to be super cool.

On a school excursion out into the bush, four disparate boys (self-obsessed popular kid, Sam; Jake, the jock; Andy, the nerd; and goth-boy Felix) are teamed up for orienteering. Getting lost under odd circumstances, they find themselves having to spend the night outdoors. The following day, after being chased by a strange tornado, they manage to make it back to town… where things have changed. They are in an alternative timeline in which they have never existed. But is it science or magic that’s the cause of their predicament? Now the adventure begins as they try to work it out and find a way back home.

“Wormholes. Quantum mechanics. Matter can slip between space and time.”

It’s a well-written series with action, adventure and humour aplenty. But it also has some depth, with good character development. Each of the boys must come to terms with what his non-existence has meant to this timeline, and in some cases things are better. They also have to learn to get along with each other. I love the fact that each of them has both good and bad qualities, and complexities, rather than being simple stereotypes. And they are different people by the end of the 13 episodes, their experiences having changed them. I particularly love the scene where Jake the jock, having saved a geeky kid from being bullied, is almost affectionately carrying around the toy unicorn he’s been given as a thank you — something he would never have done in his original timeline. The scene is both funny and touching. There’s a lot of this sort of characterisation in the series. Love it!

The four boys are exceptionally well cast, each one delivering a likeable and engaging performance. The support cast are also excellent, particularly as many of them have to play two different versions of themselves. Goth-boy Felix’s best friend is Ellen. In the original time line she’s a goth like him, out on the social fringes, but in the alternative time line she’s one of the trendy popular girls. A very nice dual performance.

The production values are pretty good for the most part, with only a couple of the CGI effects on the rabid dogs being a bit dodgy. And for people who live in Melbourne, there is the fun of playing spot-the-location. The Dandenong Ranges are effectively used and make a striking location.

The series has a definite ending, but it also sets things up for the next season.

The DVD release is a 2-disc set with an excellent behind-the-scenes doco. The four lead actors obviously had a ball making this series and their enthusiasm in the doco is infectious.

I watched Nowhere Boys with my family, ages ranging from 6 to 47, and we all loved it. My almost 12-year-old daughter, in particular, adored the series and went on to play the online game that is linked in to the first season.

It’s great to see a super-cool, high-quality Australian made series like this. It is on par with, if not better than, the best of the youth television shows coming from the UK and US. And it’s encouraging to know that it has done well overseas, particularly in the UK where it screens on CBBC. Highly recommended!

Nowhere Boys: Series 1 is released in Australia on DVD by Roadshow Entertainment.