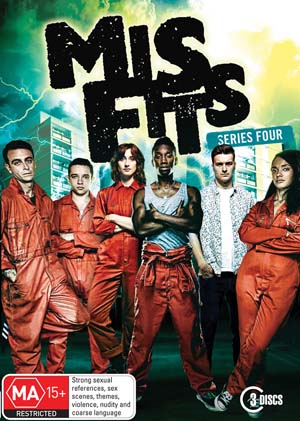 The fourth season of Misfits — a unique humorous, sci-fi drama about a group of young people on community service who acquire strange powers after a mysterious storm — faces somewhat of a challenge. How can a show like this survive once all the original regular cast have left? Easy! Reinvent itself and move on to tell a new batch of interesting stories.

The Series 3 finale saw the departure of three of its original characters, leaving Curtis and that season’s new addition, Rudy, to carry the torch. The first episode of Series 4 throws us head long into a new adventure with two new characters — Finn (who has limited telekinetic powers) and Jess (who has x-ray vision). And another cast change occurs later in the season with the departure of Curtis (brilliantly handled) and the arrival of Abbey, who has storm-induced amnesia.

The new team work exceptionally well together, with a great dynamic that hasn’t really been there since the first season. Its good to see characters with powers that are… well… a bit rubbish, really. Very amusing! As usual, the series treads the line between drama and comedy and making the viewer feel slightly uncomfortable. The writing is superb. This season’s plots deal with all sorts of weird things, including zombies, stolen money, a nun with a mysterious secret and even the search for a stolen male appendage.

Joseph Gilgun deserves special mention. He puts in an excellent performance as the two different versions of Rudy, with subtle variations in behaviour. But when a third version shows up this season, he really goes all out. I wasn’t too keen on Rudy as a character in Series 3 but, due mostly to Gilgun’s performance, he has grown on me.

Not much here in the way of worthwhile extras. There are ‘behind-the-scenes’ snippets for each episode, which show little, if anything, from behind the scenes. They are just cast and crew recounting the events of the episodes with clips. A touch boring. There are also some weird sketches with puppet versions of the cast that are perhaps too bizarre to be entertaining.

Misfits is a rather odd, unique series that is definitely worth a watch. And Series 4 does really well in extending it into new territory.

Misfits: Series Four is released on DVD in Australia by Roadshow Entertainment.

Why not check out my review of Misfits: Series One, Two & Three.