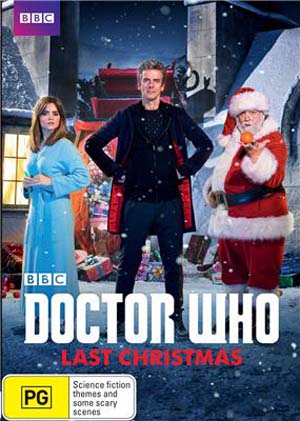 The 2014 Doctor Who Christmas Special takes things in a different direction from the whimsy that had become the staple of the Matt Smith specials. “Last Christmas” has all the trappings of a festive story (Santa, elves, Rudolf, etc) — but remove that festive wrapping, and underneath is an unsettling story about dreams within dreams, that allows the Doctor and Clara to move beyond the events of last season.

“Last Christmas” is really interesting for its homage to its source material, acknowledging the films that it references. Taking elements of Miracle on 34th Street, The Thing, Alien and Inception, it weaves them into an original and exciting tale.

On a polar research base, the Doctor and Clara stumble into a situation where the research team is under threat from alien dream crabs — creatures that adhere themselves to a victim’s head, inducing dreams as they slowly dissolve and consume the brain. The trouble is, that there are dreams within dreams, and no one is really certain where the nightmares end and reality begins. It’s a situation that seems beyond the Doctor’s ability — a situation that’s going to require the assistance of the one and only Santa Claus.

“It’s Christmas… Who ya gonna call?”

In typical Moffat style, expectations are created… then subverted. The script makes much of the is-Santa-real-or-is-he-a-dream question, and there is a little hint in the final shot which suggests that maybe he is real. Of course, that last shot could also be interpreted as confirmation that the Doctor and Clara are still within another dream, their brains slowly being dissolved. I guess it says a lot about me that I choose to interpret it in this way. 🙂

It’s quite a dark story, dealing as it does with nightmares. But aside from the sci-fi elements and all the Christmasy stuff, it is also an emotional conclusion to the Clara/Danny Pink story arc. Through the dreams, Clara is finally able to let go… and with that, agree to travel with the Doctor, emotionally unencumbered. The story ends optimistically with a new start for the two of them.

Personally, I would have liked this to be Clara’s swansong, not because I have anything against her (in fact, I like her as a companion with #12) but because her staying undermines what is one of the best scenes in this episode. The Doctor saving Clara from the dream crab, and realising that she is old and that she has spent the majority of her life without him, would have been a perfect exit point for her. But, the revelation that it is just another dream, undermines the emotion.

Nick Frost is perfect as Santa, doing a great job of combining traditional jolly old St Nick with an in-the-know, street-wise, cool Santa. Nathan McMullen (who plays Finn in Misfits — see review) and Dan Starkey (who plays Strax elsewhere in the series) are great as his smart-mouthed elves. And each of the research base team are very well cast. It’s cool that one of the base personnel, Professor Albert, is played by Michael Troughton, son of the second Doctor, Patrick Troughton (during whose tenure, the base-under-siege scenario was de rigueur).

The Christmas specials have gotten a reputation for being Doctor Who lite, but this one manages to combine the festive elements with a story that has both darkness and a strong emotional core. This one easily takes second place in my ranking, just behind “A Christmas Carol”.

A one-disc release, it also includes a good behind-the-scenes doco and an average commentary with director Paul Wilmshurst and producer Paul Frift.

Doctor Who: Last Christmas is released on DVD in Australia by Roadshow Entertainment.