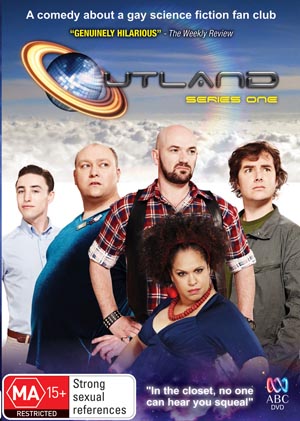 “In the closet, no one can hear you squeal” is the tag line for this ABC comedy series about a group of gay science fiction fans. Although perhaps a little too niche for its own good, this six-part series is smart, funny and rather unique.

Outland is a strange mix of science fiction geek humour and smutty humour. My interest in the show leans towards all the wonderful science fiction references, from the obvious through to the more obscure. My favourite is the reference to the Daleks having first defied gravity in the classic Doctor Who series story, “Remembrance of the Daleks” — something I myself have pointed out on numerous occasions to people who comment on the new series having Daleks finally overcoming stairs. My other favourite moment is the little homage to the final scene from the 1970s remake of Invasion of the Body Snatchers.

Geekery aside, the show’s strong point is definitely its characters. Each of the five main characters are well thought out, and are developed over the course of the six episodes. And they each get an episode in which to shine. Even though I found the character of Fab (Adam Richard) intensely irritating, he was, in the end, an integral part of the arc. And as I watched the final two episodes, I understood the necessity of having this character and even gained a touch of sympathy for him. The actors (including Christine Anu, Benjamin Paul Gerrard, Paul Ireland and Toby Truslove) are all well cast and bring much to their individual roles.

But it is quite a unique series. And while I applaud its uniqueness, I fear that it will be too niche for the general viewer. Unlike Big Bang Theory, which seems to have a more generally accessible geek humour (and I make this statement based on only ever having watched a couple of episodes), Outland includes a lot of references that only the hard-core science fiction fans will pick up on. There were many instances of my wife staring blankly at me as I laughed uproariously at certain references. A smattering of interest in science fiction may not be enough to ‘get it’. I can’t help but doubt its ability to garner enough of a following to warrant the ABC financing a second series… which is a great pity, as I would love to find out where the characters go from here. But in the end, with or without further adventures, we have six episodes to enjoy on DVD. And it’s certainly well worth watching.

The DVD release is excellent, with lots of great extra features including interviews, behind the scenes stuff and deleted scenes. The cast members even get subjected to a sci-fi quiz to test their geekiness.

Life, Death and Detention is back DVD Review — Doctor Who: Planet of the Spiders