DVD Review — Doctor Who: The Power of the Daleks 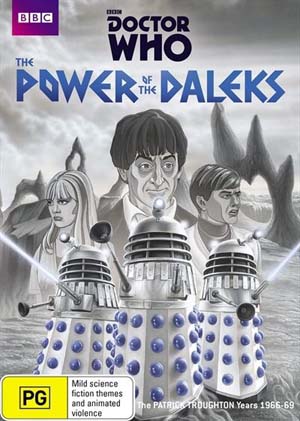 Lost for so many years due to the BBC archival purge, The Power of the Daleks has achieved an almost reverent, legendary status amongst Doctor Who fans. The third story for Season 4, from 1966, it is also the first story for the second Doctor, Patrick Troughton, who took over from the original actor William Hartnell. With all of its six episodes wiped from existence, the entire story has been animated and matched with the surviving soundtrack. But does it live up to the very high expectations that have been created by the inability to watch it for so many years?

In the past, stories with some existing eps and some missing, have been released with the missing eps having been animated. This is the first time that the BBC have released a completely animated Doctor Who story without any of its episodes surviving. On the plus side this gives us the chance to finally see this story and hope for the release of other missing stories. On the minus side… well… the animation is not very good. In fact, it’s the worst we’ve seen so far. Yes, I know there was a limited budget and they were under the hammer to get it all done for the 50th anniversary of the story. But… it’s a bit dodgy. I can live with the limited scope of movement. But the actual illustration style is not very good. Facial shading often looks more like bruising. You get used to it after a while… but really… it would have been better to delay the release and do a better job.

The animation is in black and white on this DVD release. Interestingly, I understand that a colour version will be released on Blu-ray.

Okay, now that my rant is out of the way. What about the story?

Brilliant! Loved it! It really does live up to the all the hype. The Daleks are truly a scheming and menacing force to the reckoned with.

The newly regenerated Doctor, along with companions Ben and Polly, arrives at the Earth colony on Vulcan, where he is mistaken for the Earth Examiner who has come to investigate the running of the colony. The colony’s head scientist recently discovered a crashed spaceship containing dormant Daleks, which he has reactivated, thinking they are simply robots that can be used as labour. Of course the Daleks have their own plans and are just playing along to get what they want. It is really quite chilling the way they intone…

“We are your servants!”

Add a rebellion, a murder and a leadership struggle into the mix and you’ve got a tense, exciting story. I really only have a couple of small quibbles…

One. The first ep is a little drawn out and the strangeness of the new Doctor a touch overplayed.

Two. Where the hell is that Dalek factory? Is it in the Dalek ship? Well then it’s a pretty bloody BIG ship and why didn’t anyone investigate that part of it. But if it’s in the colony itself? How in Hades name did they manage to appropriate that much space without anyone noticing? Okay… moving along.

It’s hard to asses performances purely from vocals and impossible to comment on productions values. Several scenes in the original, for example, featured cardboard cut-out Daleks in the background, but this was ‘corrected’ in the animation. But I can say that it sounds BRILLIANT! The remastering of the soundtrack is excellent.

If you can overlook the quality of the animation, this is damn fine viewing!

This two-disc release is marvellous, with some wonderful extras including a retrospective making-of special. There is also a reconstructed version of the story using stills from the episodes and a linking narration, which you can watch instead of (or as well as) the animated version. And there’s an entertaining commentary hosted by Toby Hadoke, with Anneke Wills (Polly), Derek Dodd (designer) and Michael Briant (production assistant).

Doctor Who: The Power of the Daleks is released in Australia on DVD by Roadshow.

Robots in Disguise Workshop: Writing for the Education Market