As a teenager in the 1980s, when Transformers first crossed my radar, I dismissed them as silly and childish to my friends, while secretly wishing they had been around a few years earlier when I was younger… because… well… they were incredibly cool! I mean, who wouldn’t want a toy car that transformed into a robot? But I was a teenager, at that awkward in-between age where toys are dismissed as childish because one hasn’t yet come to the realization that there is no age limit on playing. So, although I enviously glanced at the toys from the corner of my eye, I did not pick them up, I did not watch the cartoon series about them, and I certain didn’t go to see the animated feature film.

Many years later, when I was in my twenties, I became friends with a family of Transformers fans. They were shocked and stunned that I had never seen the film. They told me I should. I didn’t. They continued to pester.

In 2007 a live-action Transformers film was released. I watched it. Cool effects. Daft story. Kinda fun. But hardly Earth shattering. I didn’t bother with the sequels.

My friends continued their crusade to get me to watch the animated film.

And finally, after many years, last week, me and my family sat down and watched it with them.

Wow! I don’t know what I was expecting. But this was not it. It’s a clichéd, OTT, logic-defying advertisement for toys, masquerading as a film. There is little plot, no character development and it’s basically an extended chase with battles sequences thrown in.

“Would you like to beg for your lives? It sometimes helps… but not often.”

“Your bargaining posture is highly dubious.”

“I remember the dust was so thick on Beta 4, you had to use windshield wipers on your optic sensors.”

“Their defenses are broken, let the slaughter begin!”

“Spare me this mockery of justice.”

“A ginormous weird lookin’ planet just showed up in the suburbs of Cybertron.”

Because we watched the special edition, there is also that unexpected little swear word that apparently snuck into the original cinematic release (before being quickly excised): “It isn’t even dented! Oh sh*t! What are we going to do now?”

And then things get a bit trippy. By far my favourite scene in the film is the bizarre Transformers dance party, with Eric Idle boogieing away to Weird Al Yankovic’s “Dare to be Stupid”. One can’t help but wonder what the creators were on when they came up with that little slice of surreality.

To top it all off… the whole thing is apparently set in 2005!

My wife had a bit of a nap through it.

When asked if she liked it, my 13-year-old shrugged and said “Kinda”.

My 7-year-old responded enthusiastically: “It was good. But there were lots of parts that were boring.”

Me? I really enjoyed it! The film succeeded as a film in that I was entertained. And it also succeeded as a toy commercial, in that I immediate made a grab for the nearest Transformers toys. After all, I am now of the age to know that you are NEVER too old to play with toys.  🙂 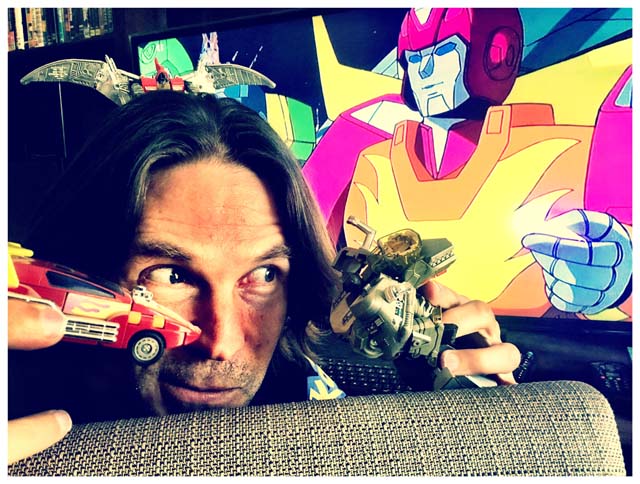 But the coolest part of watching the film with my Transformer-fan friends was being able to tell them… I hung out with the voice of Perceptor, Paul Eiding, at a pop culture expo and he’s really cool. [See gratuitous fanboy photographic evidence below.] 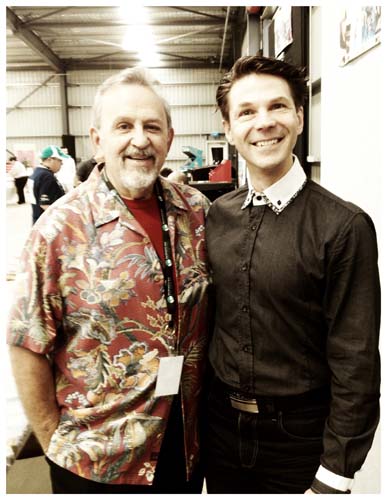 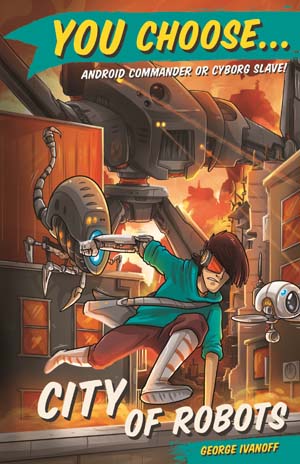 And finally, to bring this all back to my own writing… You Choose: City of Robots includes a scene inspired by Transformers, in which robots disguise themselves as a sport car, a motorcycle and a pram. Yes… a pram. But what unexpectedly happens when they transform back into robots? Well, you’ll have to go and read the book to find out. 😉

Kellogg’s Free Book Promotion DVD Review — Doctor Who: The Power of the Daleks