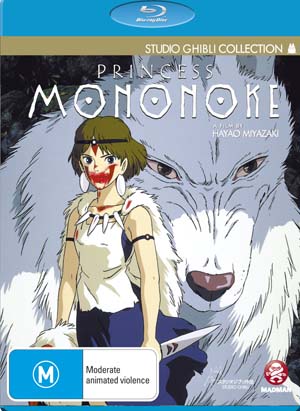 Princess Mononoke is a classic Studio Ghibli animated film from legendary Japanese writer/director Hayao Miyazaki. Originally released in Japan in 1997, the English dub premiered two years later. The film won numerous awards, as well are garnering critical and popular acclaim. It’s easy to see why — it’s a stunning film that has lost none of its impact over the years. And now it’s available in glorious Blu-ray hi-def! 🙂

Princess Mononoke is the story of Ashitaka, a young warrior whose arm is cursed by a dying corrupted Boar god. He travels west in the hope of finding a cure, but is soon caught in the middle of a struggle between the forest gods and the humans who are trying to exploit the forest resources. The Princess Mononoke of the title (Mononoke being the Japanese word for spirit or monster) is a human girl named San — raised by wolves, she fights on the side of the forest. She and Ashitaka must work together to save their world.

“Now watch closely, everyone. I’m going to show you how to kill a god.”

Steeped in Japanese mythology and history, the film has an epic quality. It is dramatic and complex, with the lines between good and evil often being blurred, indicating that sometimes, there are no easy solutions. There is so much to think about and explore in every scene. And the animation, as you would expect from a Ghibli film, is outstanding. It is a joy to watch.

The English dub was made with a script adapted by famed writer Neil Gaiman, and has a big-name cast that includes the vocal talents of Billy Bob Thornton, Minnie Driver, Claire Danes, Gillian Anderson and Jada Pinkett Smith. Although it only had a limited theatrical release, it did very well on DVD and video, bringing notoriety to Studio Ghibli in the western world. Of course, this release also gives you the option of watching it in Japanese with English subtitles. It’s always interesting to do this at least once, to see the differences between the original script and the English adaptation, and to experience the vocal power of the original voice actors.

The Blu-ray release is great. It is so good to finally have this film in hi-def. The extras are mostly trailers and promo vids, but there is a short featurette and a full set of storyboards, which are viewed overlayed on the film, so you have a comparison. Highly recommended!

Princess Mononoke is released on Blu-ray and DVD in Australia by Mandman.