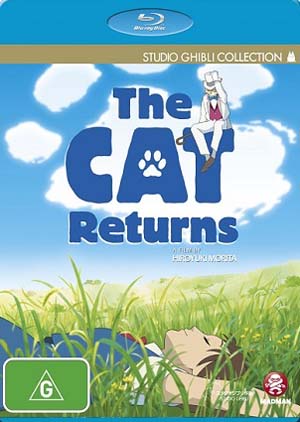 The Cat Returns is a Japanese animated film from the famed Studio Ghibli. It’s not as well known as other Ghibli films, such as Princess Mononoke (see review) and My Neighbour Totoro (see review), and is only the third theatrical feature from that studio not to be directed by studio founders Hayao Miyazaki or Isao Takahata. Although not one of Ghibli’s best, it is still an excellent film — they do set a very high bar.

A teenaged girl named Haru saves the life of a passing cat, not realising that it is the prince of a mystical cat kingdom. Her act of kindness brings her to the attention of the Cat King, who first showers her with somewhat troublesome gifts (gift-wrapped mice, etc) and then kidnaps her in order to change her into a cat so that she can marry the prince. A mysterious voice leads Haru to seek help from the Cat Bureau, where she meets an unlikely trio — The Baron, a cat statuette that comes to life (a minor character from Ghibili’s 1995 film Whisper of the Heart); a fat white cat named Muta; and Toto, a stone raven that also comes to life. Along with these three, Haru soon find herself in the midst of an adventure as she tries to escape the Cat Kingdom.

At times bizarre and over-the-top, at times simple and heart-felt, this film is never quite what you expect it to be. It is as much about believing in oneself as it is about talking cats and a statuette that comes to life. The animation is beautiful and the attention to detail is wonderful, as you would expect from a Ghibli film. It perhaps lacks the epic quality present in many of the studio’s other films or the quiet gentleness of films like My Neighbour Totoro, but it is still a joy.

Although the film is a spin-off from Whisper of the Heart, you don’t need to see the earlier film to understand and enjoy this one — the stories are completely separate. It’s a little odd that the title implies it’s a direct follow-on.

The Cat Returns was originally released in Japan in 2002, with an English language version following a year later. The Western actors, including Anne Hathaway, Cary Elwes, Elliott Gould and Kristen Bell, are well cast.

This hi-def Blu-ray release is beautiful to watch and comes with an interesting batch of extra features. Highly recommended!

The Cat Returns is released on Blu-ray and DVD in Australia by Madman.