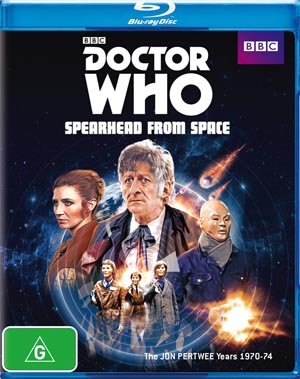 “Spearhead From Space” is the first classic Doctor Who story to get a Blu-ray release. And OMG — it looks FABULOUS! Don’t bother reading my review — just go out and buy it. Right now!

It is also the only classic series story to be shot entirely on film. This is what has enabled it to be released on Blu-ray. Most other classic stories were either shot entirely on video, or a mix of film (for location work) and video (in studio) — and those old video tapes simply do not have the resolution to stand up to a high def format. Film, on the other hand, can be scanned at high def and then cleaned up. And what a sterling job the restoration team have done with the clean up. The image really is head and shoulders above the DVD release.

While the image is stunning, the sound remains a little problematic. With the story shot entirely on location, the quality of the sound and the volume of the conversations vary a little. But such is life.

This story begins with the Doctor arriving on Earth and collapsing. Following on from the previous season’s finale, “The War Games”, the Doctor has been exiled to Earth and had his appearance forcible changed by the Time Lords. He’s found by U.N.I.T., and despite the fact that the Brigadier doesn’t recognise him and thus doubts who he says he is, he is soon embroiled in defeating an alien invasion by the Nestine and their lethal plastic people, the Autons.

It’s a well paced, entertaining story with one of the show’s most iconic moments — shop window dummies coming to life, breaking out of their window displays (although due to budgetary constraints, you never actually get to see any glass smashing), and going on a killing spree. I remember this scene terrifying me as a kid and making me very wary of mannequins (although years later, Kim Cattrall in Mannequin cured me of this fear :-)). The only down sides of this story are a couple of lapses in logic (Why has the Nestine intelligence left General Scobie alive after copying him? And why go to the trouble of putting him in a Madame Tussauds display?) and the rubber tentacle attack during the climax. It’s by no means the worst effect the series has given us, but it is disappointing in comparison to the rest of this story, which looks so damn good.

“Spearhead From Space” really was the beginning of a new era in Doctor Who. It was a change of direction for the series, with an Earth-bound setting, more action and stunts, and a new dynamic Doctor. I love this story — both in its own right and as the start of my favourite era of the series.

This release gives us a brand new set of extras, but includes none of those from the previous DVD releases (standard and special edition). So if you want to see the making-of doco or hear the commentary, you’ll need to buy the DVD as well as this Bluy-ray release. It would have been nice for the Blu-ray to have everything.

The new extras include a doco about the career of Jon Pertwee and a tribute to Caroline John (Liz Shaw), who passed away in 2012. Both of these are brilliant and, in and of themselves, make this Blu-ray worth purchasing. There is an overly long compilation of raw, mute test footage for the new title sequence. I would have preferred less of this in favour of a doco about the making of the sequence. There is a short comparison of footage to demonstrate the restoration process for Blu-ray. It’s interesting, but leaves you wanting more… again, a proper doco would have been better. And then you have a very amusing trailer for “The Green Death”. It’s a very modern style of trailer that makes the story look rather more fast-paced and high-budget than it actually is. 🙂

“Spearhead From Space” on Blu-ray is an absolute, unequivocal, must own release for fans! If you already have it on DVD, upgrade to the Blu-ray for the stunning picture quality. If you don’t have it, then opt for the Blu-ray, despite the omission of the previous extras. Of course, like me, you could always get both (and the cynical part of me is assuming that’s what the BBC are banking on fans to do).

Book Week and beyond DVD Review — Wizards vs Aliens: Series 1