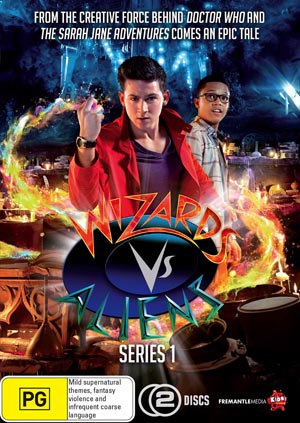 It is impossible to review Wizards vs Aliens without referencing The Sarah Jane Adventures (see my reviews: Series 3, Series 4 and Series 5). Although telling a very different story, Wizards vs Aliens has a similar style and feel, and the same two-part story format as the earlier series. Not surprising, given that much of the production team carried on from one series to the next.

Tom Clarke is a teenage wizard, who lives with his grandmother (also of the magical persuasion) and his widowed father (an ‘unenchanted’, mere mortal). Tom is progressing through life, trying to deal with the everyday problems of school and teenage life, as well as being a wizard, when something new is thrown into the mix — aliens! The alien Nekross eat magic, and they have come to Earth (the last known source of magic in the galaxy) to drain the living essence from all its wizards. Teaming up with the school science nerd, Benny, Tom finds himself battling aliens in order to save his people.

For the most part, it’s a good-looking series, with its modest budget well spent. It only falters slightly with its puppet creatures, particularly the Nekross king — although being so enthusiastically voiced by Brian Blessed goes a long way towards smoothing it over.

The cast are well chosen and do a good job. But I have to single out Gwendoline Christie (Brienne of Tarth in Game of Thrones), who plays the alien Lexi. Although she does a great job from behind heavy make-up and prosthetics, she really gets to shine in one particular story where Lexi disguises herself as a human. She displays a great deal of depth and subtlety in that story.

There are 12 episodes in this first season, making up six two-part stories. The individual stories vary in quality, with some scripts being better than others. There are numerous clichéd plot points that make appearances, from peer pressure tempting Tom with the dark side of magic, to Tom’s mother losing her life protecting her son. The standout story for me was “Friend or Foe”, in which Lexi takes on human appearance. This story humanises the aliens and gives Lexi some shades of grey characterisation (something which is then carried on into the following stories). This story also gives us some human villains.

With the exception of “Friend or Foe” and “Rebel Magic”, the stories do all come down to the basic premise of wizards versus aliens (which is fair enough, given the title of the series)… but I do worry that it might be difficult to continue down this track without some more variation in the plots. There is only so many times the Nekross can hatch a new plan, only to have it defeated by Tom and Benny. I will be watching season two with great interest to see how they handle this.

The only extras on this two-disc set are deleted scenes and some outtakes. The outtakes are amusing, and I always find deleted scenes interesting — it’s fascinating to see which bits ended up on the cutting room floor. I would have liked to see a making-of doco.

The first season of Wizards vs Aliens is by no means television brilliance… but it is a lot of fun, and shows great potential. Roll on series two!