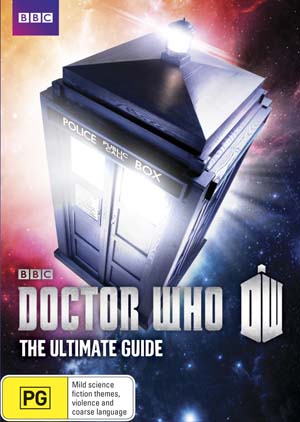 Doctor Who: The Ultimate Guide is a two-hour documentary, made last year to commemorate the 50th anniversary of the long-running television series. While it doesn’t really live up to its grandiose name, it is a good introduction to the world of Doctor Who for newbies.

The Ultimate Guide is not a particularly insightful or in-depth documentary. But it is a pretty good introduction to the series, providing an overview from the show’s beginning in 1963 through to the finale of nuWho Series 7, “The Name of the Doctor”. It does a good job of distilling the history of the series into one easy to consume package, covering each of the Doctors, the evolution of the companions, the show’s major villains and various other important aspects. Watching it would bring a newbie up to speed prior to watching the 50th anniversary special, “The Day of the Doctor” (see my review). So, with this in mind, it is a very successful doco.

But it has its problems. It is bookended by some pretty cringe-worthy scenes in which the Doctor looses his memory and has to refresh it by reading through his diary. Argh!

While a lot of interesting people with a connection to the series are interviewed in this doco, we are also treated to interviews with irrelevant B-grade ‘celebrities’, with tenuous links to Doctor Who. Okay, so the members of pop group McFly had a cameo in “The Sound of Drums”… but did we really have to be subjected to so much of their inane musings about the series. Comedian Jon Culshaw is particularly annoying with his impressions of various Doctors. Okay, so Culshaw did vocal work on The Five(ish) Doctors Reboot and “Death Comes to Time”… but he is given too much screen time here. The doco would have been better off dumping the irrelevancies and tightening the whole thing by half an hour.

Doctor Who: The Ultimate Guide is a vanilla release with no extras.

Doctor Who: The Ultimate Guide is released on DVD in Australia by Roadshow Entertainment.