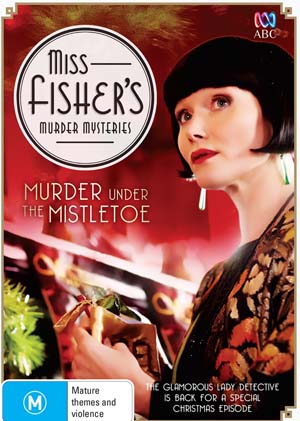 The season two finale of the ABC’s Miss Fisher’s Murder Mysteries also doubles as the 2013 Christmas special. “Murder Under the Mistletoe” finishes things off with multiple deaths, a snowy setting and yes… kissing under the mistletoe. It’s a wonderful end to the season, but unfortunately it may also be the final ep of the series.

“Murder Under the Mistletoe” is a variation on the classic old bump-‘em-off-one-by-one-in-a-secluded-location scenario. But with a Christmas theme… well, Christmas in July, anyway. So we have carols and mistletoe, Christmas trees and snow, and… MURDER! And the murders are all being committed with The Twelve Days of Christmas as inspiration, beginning with “a partridge in a pear tree” where the victim is electrocuted by pear-shaped Christmas lights whilst trimming the tree. The whole thing is glorious, murderous fun.

All the extended cast is brought together for this ep: including the excellent Tammy MacIntosh as Dr Macmillan, the wonderful Miriam Margolyes as Aunt Prudence, and even Ruby Rees-Wemyss as Miss Fisher’s mostly absent ward Jane. The regulars are, as always, quite brilliant. Essie Davis really is the life and soul of this series as Miss Fisher, but the others all do their utmost as well. Nathan Page in particular deserves a great deal of credit for his subtle and convincing performance as Detective Inspector Robinson.

The production values are great, particularly the lovely locations and costumes, which do so much to give an authentic 1920s feel.

The release itself is nothing special, with only one extra — a good, but much too short Behind-the-scenes doco.

At this stage, there is no word a third season and the future of this wonderful programme hangs in the balance. One can but hope that the ABC comes to its senses and eventually renews this show.

Miss Fisher’s Murder Mysteries: Murder Under the Mistletoe is released in Australia on DVD by Roadshow Entertainment.