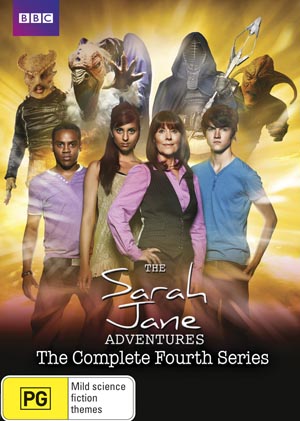 The Sarah Jane Adventures is one of two spin-offs from the hugely popular revived Doctor Who series. With Doctor Who aimed squarely at a family audience, the spin-offs diverge with Torchwood heading for adult territory and The Sarah Jane Adventures going for the kids. This fourth season is very entertaining and continues to see the series improving.

The Sarah Jane Adventures sees the former Doctor Who companion teaming up with three kids, Luke, Clyde and Rani, to investigate alien occurrences and regularly save the Earth. The series has sometimes suffered from poorly thought-out logic, occasional dumbing-down of scripting and frequent overly melodramatic cliff-hangers. Despite this, the likeable characters and interesting concepts have continued to result in a very watchable programme. With each season it seems to have been getting stronger — and season four continues this trend.

This season consists of six two-part stories. “The Nightmare Man” is a reasonable opener with some nice moments. A good concept, with a dream entity attempting to gain entry to our dimension through Luke’s nightmares, it ends up being a little overly melodramatic. It’s noteworthy also for packing Luke off to University (with K9 in tow). He makes some appearances through this season via video link, but doesn’t appear properly again until the final episode.

“Vault of Secrets” sees the return of Adrovax, a villain from last season’s “Prisoner of the Judoon” (see my review of Season 3). His character is given a good twist and the ‘men in black’ are amusing and well handled.

“Death of the Doctor” is this season’s most anticipated story as it connects directly with its parent programme. The Doctor is apparently dead, his funeral to be hosted by U.N.I.T. and presided over by a race of vulture-like alien undertakers called the Shansheeth. Sarah Jane and the kids head off to the funeral where they meet Jo Grant (Katy Manning), one of the Doctor’s other old companions. Of course, the Doctor isn’t really dead and he soon shows up in his eleventh incarnation as played by Matt Smith.

This should have been the season highlight (as “The Wedding of Sarah Jane Smith”, which guest starred David Tennant, was in season three), but alas it is not. It is quite entertaining but suffers from some overacting (especially Laila Rouass as U.N.I.T.’s Colonel Karim), some not-so-great aliens (the Shansheeth look like reject Skeksis from The Dark Crystal) and some lapses in logic. Nevertheless, it is great to see Jo Grant again, and her teaming up with Sarah Jane is quite amusing. And the look of disappointment on Jo’s face when Sarah Jane mentions that she has seen the Doctor several times since their travels had ended, is dramatic gold.

“The Empty Planet” sees everyone on Earth disappearing, including Sarah Jane, except for Clyde, Rani and a mysterious boy named Gavin. It’s atmospheric and the robots are rather cool, but the ending is quite rushed and unconvincing.

“Lost in Time” is definitely my favourite story of the season. It is a well-written time-travel tale with believable characters that you come to care for. Sarah Jane, Clyde and Rani are sent to different points in Earth’s history to retrieve artefacts that can control time. I was pleased to see that this episode did not sugar-coat history, particularly the plot-line involving Lady Jane Grey.

“Goodbye, Sarah Jane Smith” is an excellent end to the season, bringing Luke and K9 back for the final episode. Julie Graham as Sarah Jane’s ‘replacement’, Ruby White, is particularly good — she is OTT, but not too OTT.

All up, season four is very enjoyable. Yes, it’s a kids show, but there’s lots for grown-ups to enjoy as well. I certainly loved watching it with my nine-year-old daughter. 🙂

This DVD release is a little better than the previous season. As an extra feature it contains the four-part classic Doctor Who story, “Pyramids of Mars”. As a Doctor Who fan, I already have the DVD release of this story… but for kids who may not have seen the original series, this is a great addition as it’s one of the best Doctor Who stories to feature Sarah Jane Smith.

Sadly, due to the death of Elisabeth Sladen, who played Sarah Jane, there is only half a season left to go. I will be reviewing that in the coming week, in conjunction with a DVD giveaway. So stay tuned.

The Sarah Jane Adventures is released on DVD in Australian by Roadshow Entertainment.