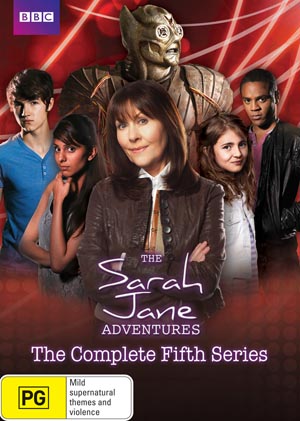 This is the fifth and final season of the Doctor Who spinoff series, The Sarah Jane Adventures, and it is only half the usual length due to the death of its star, Elisabeth Sladen. It is so sad that it’s all over. This show got better and better with each season… I would have loved to see it continue to develop.

The Sarah Jane Adventures sees the former Doctor Who companion teaming up with three kids — Luke, her alien cloned, adopted son; wannabe schoolgirl reporter, Rani: and their friend Clyde — to investigate alien occurrences and regularly save the Earth. Oh yeah, and she has K9 the robot dog and an alien super computer named Mr Smith to help her out. In season four, Luke went from regular to semi-regular cast member, as his character was packed off to university with K9 (see my review of The Sarah Jane Adventures: The Complete Fourth Series). This season has three two-part stories.

Things kick off rather well with “Sky”, in which a baby girl is left on Sarah Jane’s doorstep. Sarah Jane names her Sky. But she’s no ordinary baby. She is, in fact, a generically produced super weapon — a bomb — made by aliens to defeat a race of mechanical lifeforms. As the bomb is primed, she suddenly becomes a young teen. But will she fulfil her destiny and destroy an entire species? Or can she overcome her genetic programming? Well, since Sky becomes a regular from this story on, I’m sure you can work out the answer to that. 😉 As the other kids are growing up, the inclusion of a new younger cast member seems a good way of keeping the young viewers engaged.

“The Curse of Clyde Langer” is another really good story. In this one, Clyde finds himself being hated by anyone who says his name, including Sarah Jane, Rani and his mother. Only Sky seems immune to the ‘curse’. Clyde teams up with a street kid, giving her a fake name to avoid the curse, to try and work out what’s going on. I get the impression that this story was also setting things up for a future episode that never happened.

And finally we have “The Man Who Never Was”. A new supposedly revolutionary portable computer is about to be released. But there’s something very wrong with its inventor Joseph Serf. And why are their one-eyed little aliens in the basement of Serf Industries? Another great ep.

This is really an excellent season, with three very strong stories. The themes being tackled in this season seem rather more mature. A kid who has been designed to be a bomb in the frist story. Street kids and homelessness in the second. And we have slavery in the third. Brave decisions that have paid off with thoughtful, engaging stories. It is such a pity that there will be no more.

The final moments of the series had my eyes misting up with a montage and voice-over, finishing up with these words emblazoned across the screen:

And the story goes on …
… forever.

There is a lovely documentary included as an extra — “Goodbye Bannerman Road – Remembering Elisabeth Sladen”. I defy fans to watch this and not cry.

DVD Review — The Sarah Jane Adventures: The Complete Fourth Series In the news with TRUST ME TOO