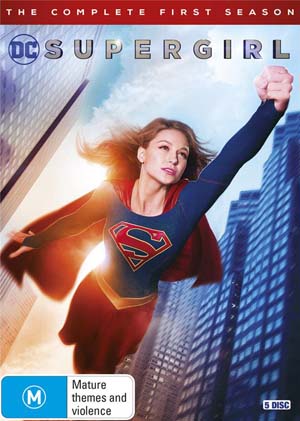 Yes… another comic book super hero adaptation. Believe me, when I first heard about it I thought, we don’t need any more. But then I watched it. And, guess what? I loved it! Supergirl is fun. Supergirl is smart. Supergirl subverts expectations. And in this current age of male-dominated superhero shows, having a powerful female character spearheading a major series is pretty damn GREAT!

So, I’m guessing you all know the premise. When the planet Krypton went ka-boom, it wasn’t just Kal-El (Superman) who escaped to Earth… his cousin Kara Zor-El did as well. She become’s Supergirl and has the same powers and weaknesses as Superman.

In this television series version, Kara keeps her powers hidden for many years, trying to live a normal life, leaving the superhero business to her cuz (who is conspicuously absent from any onscreen time). She lives in National City where she works for media mogul, Cat Grant. But she eventually reveals herself to the world by saving a crashing plane, on which her adoptive sister Alex is travelling. Turns out Alex works for a secret government organisation called the Department of Extra-normal Operations (DEO). To cut a long story short, Kara becomes Supergirl and goes to work for the DEO, helping them to track down and deal with a whole bunch of alien criminals whose prison ship crash-landed on Earth.

Also in the mix on the side of the righteous are IT tech Winslow Schott, the famous Jimmy Olsen and head of the DEO Hank Henshaw. And in the opposing corner we have Kara’s auntie Astra (who is one of the crashed crims) and her husband Non. And somewhere in the middle, sits millionaire Maxwell Lord.

There are good eps and not-so-good eps… and there are a few exceptional ones. All up, the standard is pretty high. There are some nice nods to the past, particularly the casting of Helen Slater (Supergirl from the 1984 film) and Dean Cain (Superman from the Lois & Clarke series of the 90s) as Kara’s adoptive parents. But there are lots of little things – Non from the Superman films; the myriad power source resembling the Supergirl film’s Omegahedron; the holographic dead Kryptonians of the Superman movies.

The changing relationship between Kara and her aunt is well-handled, with resulting motivations not always being quite as expected. The Hank Henshaw/Martian Manhunter (J’onn J’onzz) subplot is interesting, if not always convincing.

The writing is often quite smart and unexpected, within the wham-bam formula of a superhero action series. The cast are excellent! Melissa Benoist makes a likable, relatable Kara and a kick-arse Supergirl; and manages to be vulnerable and strong as both. Among the supporting cast Mehcad Brooks as James Olsen and Peter Facinelli as Maxwell Lord are standouts.

But for me, the absolute highlight of the series is Calista Flockhart as Cat Grant, head of the CatCo media empire. She is a surprisingly nuanced character. She gets all the best lines (not just the funny ones) and gets to give one of the greatest inspirational speeches ever. Examples…

“I’m a writer. It’s like riding a bike, or severe childhood trauma, you never really lose it.”

“All four of you standing there doing nothing, you look like the attractive yet non-threatening, racially diverse cast of a CW show.”

“Oh, Keira. You have just stumbled upon the most annoying question of the century, and you are so young that you do not even realise it. How do you juggle it all? You learn, that’s how. You start with two balls before adding another. I figured out how to be brilliant in business and then I added being a brilliant mother. Far too many women burn out trying to do too much before they’re ready. So can you have it all? Of course. Just not all at once, and not right away. And not with that hair. Use conditioner, for God’s sake.”

“You don’t get to be a real person. You’re a superhero, you get to represent all the goodness in the world.”

“I’m the hero. I stuck a label on the side of the girl. I branded her. She will forever be linked to CatCo, to the Tribune, to me. And what do you think is so bad about “Girl?” Huh? I’m a girl. And your boss, and powerful, and rich, and hot and smart. So if you perceive “Supergirl” as anything less than excellent, isn’t the real problem you?”

And my favourite (since she’s actually married to Harrison Ford)…

“Kiera, call Harrison Ford and tell him I’m flattered, but once and for all, I do not date older men, especially when they’re married.”

Cat Grant could easily have been a two-dimensional stereotype. Instead there are hidden layers, revealed little by little. Flockhart seems to relish playing Grant. And even if the rest of the show was crap, I’d still watch it just for her.

For those of you interested in the other superhero series, The Flash (see review), it’s worth noting that there’s a cross-over ep with Grant Gustin guest starring. It’s one of the sillier eps. But it is fun, and Gustin and Benoist have a lovely chemistry, making the episode’s shortcomings forgivable.

This five-disc DVD set comes in standard packaging and has a few interesting extras. The deleted scenes, presented with the eps they are from, are a highlight. It’s always interesting to see what the makers decide to leave out. The Gag reel is also really funny.

Supergirl: The Complete First Season is released in Australia on DVD by Roadshow Entertainment.